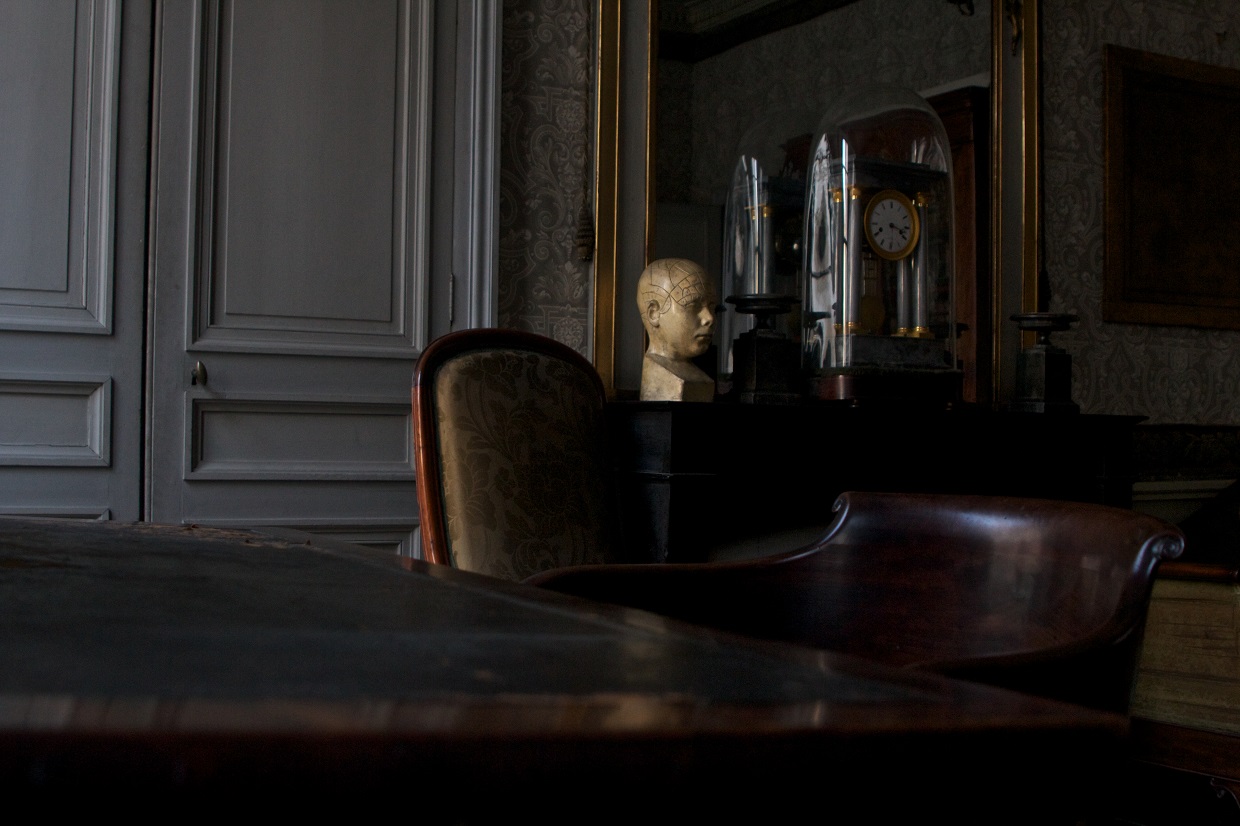 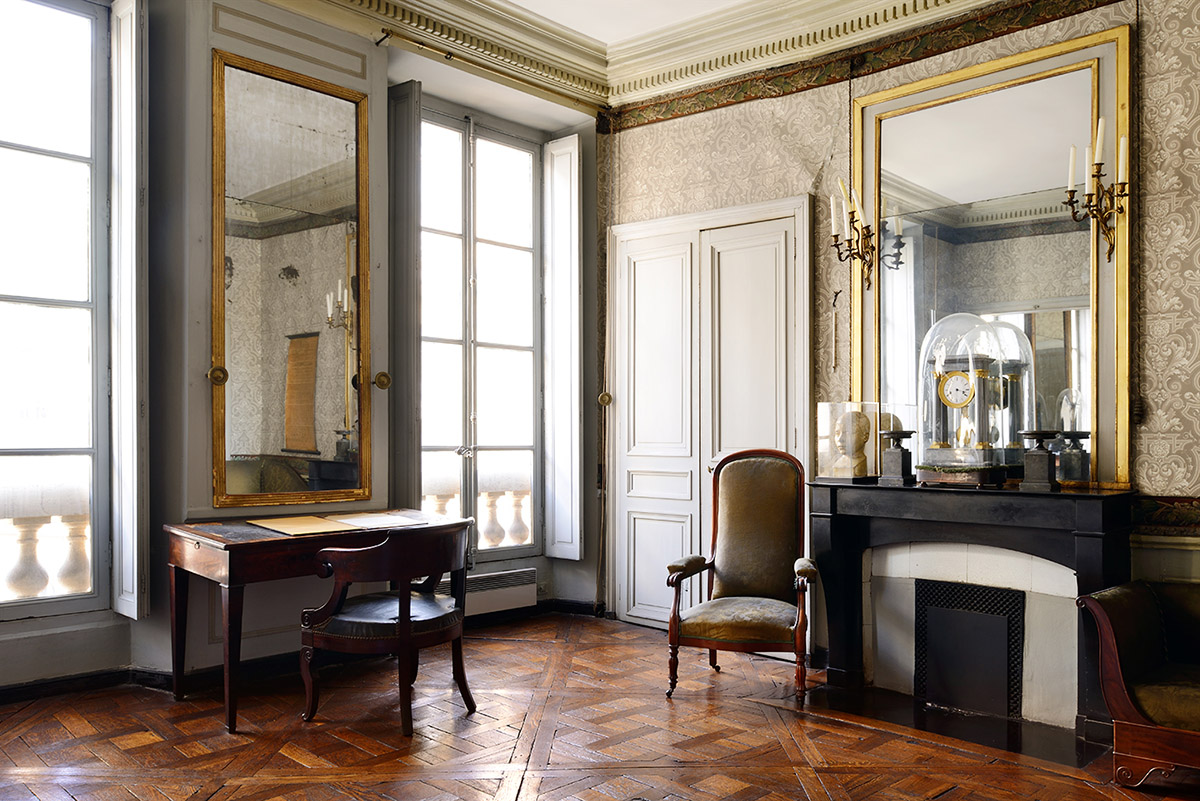 The apartment of Auguste Comte is located on the second floor of Number 10, rue Monsieur le Prince. It covers the entire floor with its 150 square meters.

What is left, a century and a half later, of Auguste Comte’s personal belongings, furniture, books in his apartment? The kitchen, the dining room, the living room, his study and the bedroom have been restored and reconstructed in 1960 by Paulo Carneiro from an inventory made in 1857.

The kitchen is tiled and has kept its furnace and fireplace, covered since 1930 with simple cabinet-like woodwork. Other parts have been sold: a square table in walnut, a kitchen table made of beech wood, and two chairs. A glass partition separates the kitchen from a small room in which there is an oak sideboard with two doors. The two wooden chairs and folding bed were sold as well in 1857. 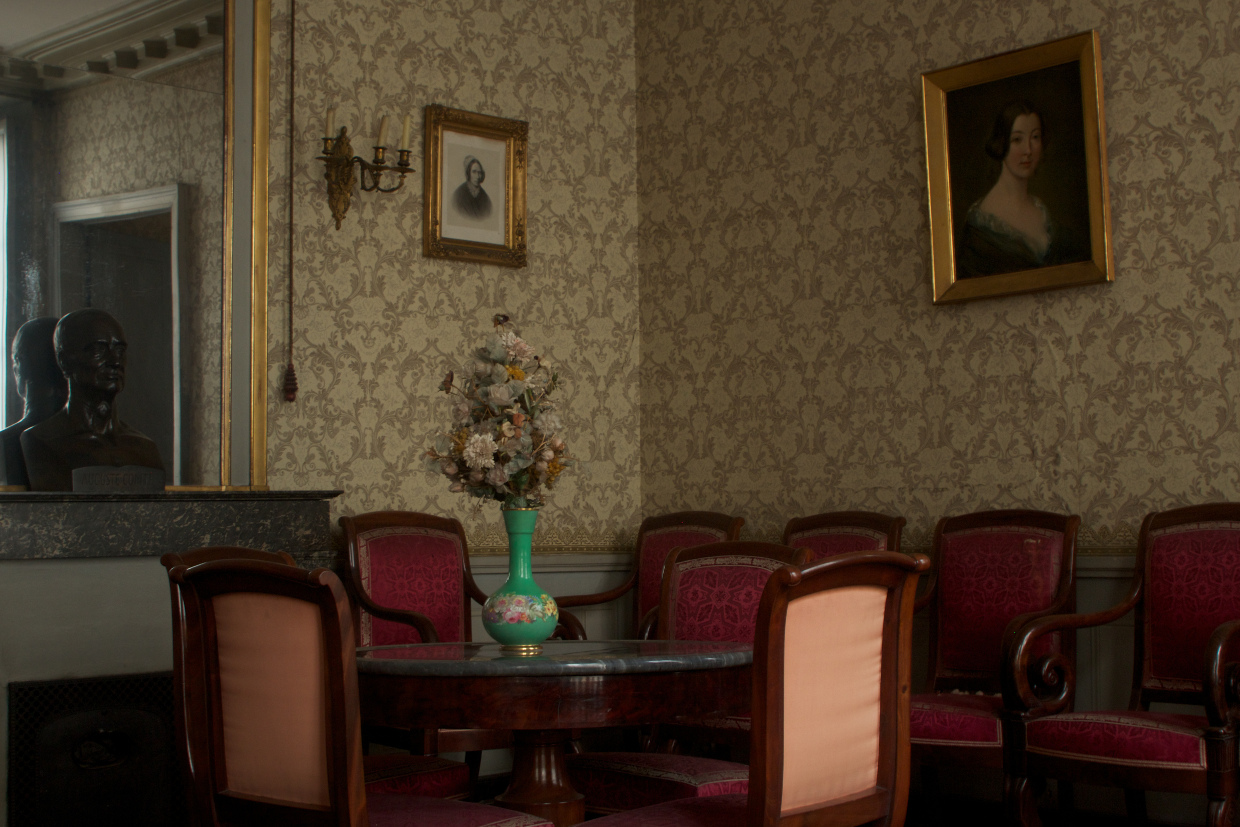 The dining room, lounge and workroom are three adjoining rooms with parquet floor, all facing the street with two major windows which still have espagnolette locks and interior shutters. Fireplaces with combinations of black and St Anne marble surmounted by large mirrors with golden borders are in every room.

The dining room has not changed: two candlesticks in bronze, a porcelain flower vase, ten chairs in mahogany, gondola shaped, covered with red Utrecht, a round dining table with extension, a buffet shelf of mahogany wood. Only the small copper scales with their weights have moved. They are now in the kitchen. Comte used to write before a mirror – as he said, “inspired by his three angels” Rosalie Boyer, his mother, Clotilde de Vaux, his friend, and Sophie Bliaux, his maid.

The lounge is adorned by a portrait of Clotilde done by the painter and sculptor Antoine Étex. It is hung just above the mahogany chair on which she used to sit during her weekly visits. The cherry silk cloth that covers the seat is worn unlike the rest of the furniture (a sofa, chairs, armchairs, footstools). Disciples and successors did not want to touch the object that had become sacred. The apartment is a place of memory. The chair she used, the bouquet of fabric flowers she had crafted, a locket containing a lock of her hair, her letters are the imprint left by the young woman. This is the salon in which in the days of Auguste Comte and Pierre Laffitte sacraments of the religion of humanity were performed: baptism, initiation, presentation… The archive contains all the manuscripts of Auguste Comte regarding the development and implementation of his religion. It is interesting for instance to see here the various editions of the positivist calendar. 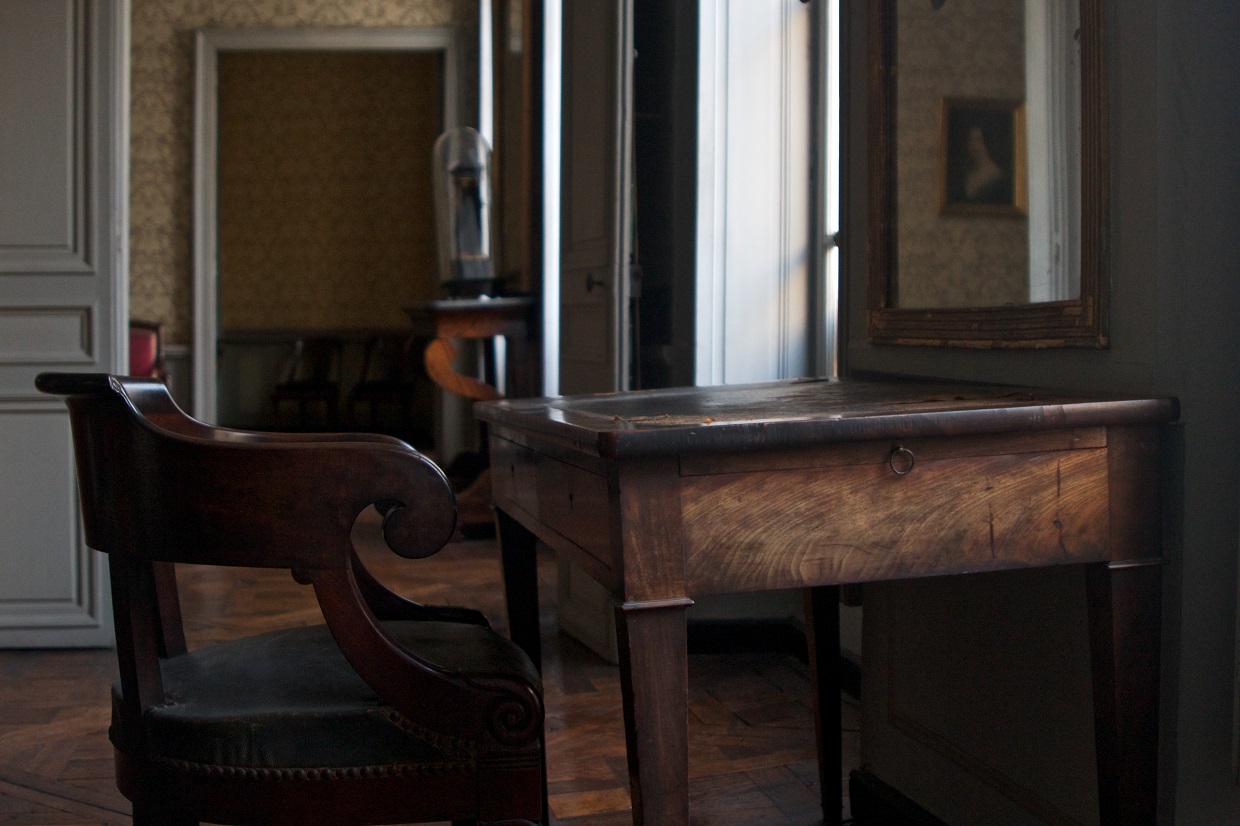 Comte’s study room still has the wooden desk, covered with sheepskin, at which Comte conceived his second great work “Treatise of Sociology, Instituting the Religion of Humanity” (or System of Positive Polity), the Catechism of Positive Religion and the Library of the Proletarian. He received in that room the members of the Société Positiviste, founded in 1848. The two bodies of the library with their glass doors contain personal books of the philosopher. The leather covers are still the same and one can admire here a volume of the Spanish Historia de los Arab domination en Espana published in 1840, as well as the complete works of Buffon published in 1835, or The Prince by Machiavelli in an edition of 1822.

The bedroom is the final room to discover. The walls are covered with tiles and its window overlooks the main courtyard. The muslin curtains of and the two crossing yellow calico curtains of the window are gone. A round night table with marble tops and two foot mats are also lacking. But you can see the bed behind two yellow curtains in its alcove, a mirror in its gilded wooden frame, the secretary, the basket with the artificial flowers presented by Clotilde de Vaux and a number of utensils: a sugar bowl, a jug, glasses, bronze candlesticks. Some more personal belongings of the philosopher are today on display in glass cabinets at the entrance or sheltered in a bedroom closet: shirts, pants, shorts, comb, hat, coins, glasses, wallet, skylights, card visit, a lock of hair.


The ground of no. 5 Payenne Street, Paris, was purchased in 1642 by architect François Mansart who built his private home on the site. After several other owners, the building was bought in 1842 by the jeweler Antoine Bret. It was during a trip to Paris in 1902, that Raymundo Teixeira-Mendes, then the chief representative of the religion of humanity of Brazil, discovered the building where Clotilde de Vaux had supposedly lived (she had actually lived at no. 7) and decided to turn it into a place of devotion. Brazil’s positivist church bought for this purpose the entire building in 1903. The street facade and the first floor were modified by architect Gustave Goy. He also added a bust of Auguste Comte and the positivist motto “Love as a principle and order as the basis; Progress as the goal”. The Chapelle was finally inaugurated on June 2, 1905.

Designed as a secular temple, the interior basically takes its program from the positivist calendar which paid homage to the great men and women of all times. The place with its rare opening times remains an intriguing experience. A listed historical monument since February, 19 1982, the Parisian Chapelle is today the only positivist temple intact in Europe. (The last English temple, the one in Liverpool, was used only for a brief time in 1914. The Temple that was built in Iași, Romania on the initiative of Panait Zosin was destroyed in the events of the revolution of 1989).