[Gotha, Germany] “What you see is real” – an interesting statement made on Chen Wenling’s web page; one might ask: what else should it be? I took this screenshot, before the message will disappear into the world of unstable web artefacts, klick at it to get the full resolution:

One might be tempted to dismiss any such claim with the assistance Kant can offer, who stated that we could never see more than an image of the thing – that real “thing itself” out there. And the image we see? is, so the complaint since Plato, all too often distorted, illusionary, everything but the real thing.

Ernst Mach took the opposite stance at the end of the 19th century when stated – both with and against Kant – that we will indeed never see that mysterious “thing itself”; and that we sould hence rather not call that thing part of our reality. The “external reality” is as much as any “internal reality”, so Mach, nothing but a construct – an interesting and constructive interpretation of what we feel “we see”. All we actually have as primary reality is perceptions, sensual elements we categorise as “visual“, “acoustic”, “tactile”… and bring into a useful order (so the positivistc backbone of “empiriocriticism”). The world of “things out there” is, so Mach, a useful construct designed to allow certain predictions of how things will behave, yet really nothing more. Things as we see them behave as if they were three-dimensional objects. The attempt to prove that their world “exists” is, so Mach, philosophically futile, a step into the world of metaphysics. 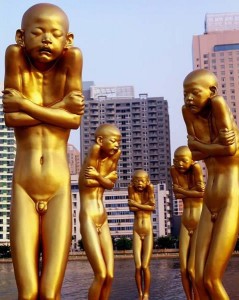 And if all these perceptions were illusionary, a dream? It would not make a difference, so Mach. In this dream, we would say, that things behave as if they existed as “solid objects” that could actually hurt “us”. We try to make sense of this field of observation, our perceptions. That “arm” I claim to be “my arm” deserves this claim only because of its special relationship to other perceptions like the perception that I can move it quite unlike the window over there. I give the same interpretations to sensual data whether I “dream” them or whether I assume I “see” them.

What I see is not only real — It is the only reality I have. My interpretations are less real, are questionable, are arbitrary, stand in need of revisions (as for example, when I feel “I am waking up”).

May be Chen Wenling is a kind of neo-empiriocriticist. Can also be he wants to say that his objects are real stuff one can buy on the international art market – objects that will eventually be as real as the chilly world out there. How can I tell?