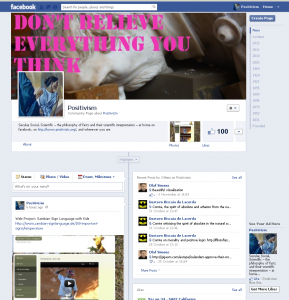 That is not exactly a number to celebrate, rather one to examine – in facebook terms it is a rather modest number.

[Olaf Simons, Gotha, Germany] I opened the facbook page of global positivism on March 15, 2012 with a bit of curiosity about the new features facebook was to give to “pages”. The project itself eventually developed with the features facebook introduced – and under their influence.

Open a facebook page, not a personal one but one for a company or organisation, and facebook will inspire you to develop an entire program for that page. Create a slogan! – “Secular, Social, Scientific”, now that was easy. When did your project start? 1830? Accepted. What is your mission? – Progress, definitely. And your product? Modernity, in that case. Did you get any awards? Not that I would remember – funny, why did not we get an award? I must check this.

Create a “timeline” reaching back to 1830 – that is a nice project. And then start posting.

Posting required a couple of further thoughts. Basically I wanted to use this page for short messages, which are far easier to post on facebook than on our own webpage. So I filled the facebook stream into our news page. Still, the question remained: what did we want to post?

Secular, Social, Scientific? – There should not be a lack of topics, especially since everything would eventually, so Comte in yesterday’s blog entry, find art as the wider platform.

Who were we going to address? Those who search for positivism on facebook. You typed in the first letters into the search box? …and you are already offered all kinds of targets such as: “Positively Positive” with 1.3 million likes, now that is a competitor. 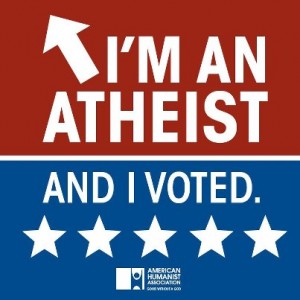 Our true competitors had to be pages that would propagate “rational thought”, “the sciences” and in that case often: “atheism”. We were, after all, heading towards the US-presidential elections, and the United States are presently divided into a block of conservative creationists and atheists fighting them – this is at least the facebook world of your competitors once you write English.

Actually atheists perform extremely well these days. “Welsh Atheists (anffyddwyr Cymru)“, for instance, started on July 14, that is four month after us, they are half our age, yet they overtook us within a week and stand now at 346 likes. And they are but small and exotic. The big players of the atheist world have thousands of subscribers who get their daily share of propaganda pics.

Positivism – needed a somewhat deeper consideration. We are rather promoting a philosophy of facts, a philosophy that moves the god question into the far more uncanny region of fake problems. Positivists handle data, they are interested in interpreting these data. Data visualisations became an interesting topic here – leading again immediately into the social sphere and into the sciences. Art, Comte said, would be central. I began throw out different links to see how the audience would respond: art that touched the social sphere, art with a secular dimension, art that used the sciences and modern technologies. The “managers” can see how each individual posting is received. You throw pebbles into a basin and take a look at the waves they create; and facebook is very specific here: You learn how many viewers you addressed in the first turn (not all your fans are online every day and ready to see what you posted). And you learn what they did with your posting: Did they “like” it? Did they “share” it, and if they shared it, did it get more viewers as it “went viral”? 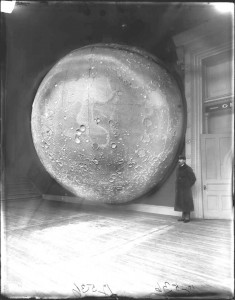 Our most successful posting appeared on May 28: the man who guarded the moon in the late 19th century museum. The posting was re-posted by others and turned viral. More than 470 people have seen it, and quite a number of them converted to positivism in the event.
I have, by the way, no idea who posted this image. I had by that time already begun to invite fans to act as site managers with me. The page had thus accumulated its own sociodynamics. Theoretically the new managers could have kicked me out. Thus far they did not. Facebook eventually realized that it would be interesting to offer deeper hierarchies of page-makers from contributors and authors up to top level responsible people. Presently we have 100 likes. Of these 16 are “managers” and 2 “content contributors”. Contact me if you want move into the inner circle. Positivism should be a social thing. 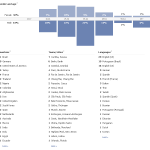 Who are these 100 people? We get specific statistics: Two thirds are male, one third is female. I have seen similar statistics on the pages for atheism (who published their statistics). Most of our fans are in the 35–44 years age group. Click the thumbnail to see the exact numbers. Facebook even shows you where you live, statistically, and that is where we are truly special. Brazil, the old center of positivism, has its own fan community. Germans are strong (probably because they are the country of order and progress). Turkey, another historical heartland of positivism, has its own fan community. 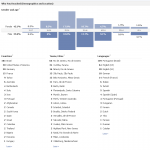 If you wonder who you could reach through this community – facebook again will tell you. These are just the data for the last month. Brazil leads here with 184 people reached. The US and Germany follow with 30 each. The gender ratio is now more equal: 45/54 (fe/male); which shows that women are just less likely to confess their secular leanings.

All this is, of course, supposed to turn you into your own project’s addict: post and see how many people you can reach with that particular posting. Post and see how many fans you can create per week and per month. “I bet we can get one million people to say they are proud to be an Atheist” is one of the competing pages. As a true addict you should live through your ups and downs, and facebook, as a true designer drug, has an easy handle to create these illusionary ups and downs. You get a daily show of statistics: How many people did you reach, and how far did they spread your messages? And as with any designer drug you should be careful with the statistics you get.

Facebook offers you data exports (if you are among the page’s “managers”), and as they pop up as Excel files you can now generate your own statistics. The following one is more specific. It shows the number of views individual postings have received between July 23 and October 10. Each number is the accumulate number of views within the first 28 days of the particular posting (that is why I ended about 28 days ago). As we gained more and more likes every week the graph should have risen gradually with them – yet something peculiar happened between September 13 and the next posting three days later. 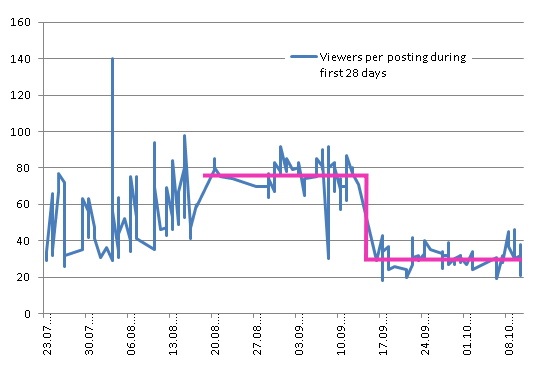 In the month before this particular weekend we spread 87 postings. The average number of viewers per posting was 74. The next month had 91 postings, so more or less the same service to our audience. Each of these postings would now, however, receive but an average 31 views within its next 28 days. The drop between these numbers is sharp: all postings of the 13th range in the 70s. All postings of the 16th are on the new level. Facebook is obviously able to throttle the page views – after all it’s they who create the daily mixture of postings you as the audience receive. 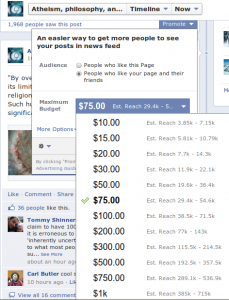 Other facebook pages have started to campaign and requested their subscribers to give their postings a “like’ or “share” every now and then, so that the audience remains more than a nominal number. Facebook’s aim is, of course, that one of these days one of us pushes the pay button that will lead him or her to the price list: Pay between 10 dollars and 1k and get the thousands of viewers and “likes” you are dreaming of. Well, positivists seem to be a sober gang, nothing harmful has happened thus far.

As a “manager” you can see who has personally “liked” you page, and that has become my personal inspiration. Most of our fans show exquisite tastes, interests and views. I began to make (facebook) friends within the imaginary community and love the perspectives of their personal postings.

May be that should be the next step: that some of our facebook fans jump from the facebook page to this site, our blog, with the intention to offer more of their perceptions here… this is an open project in the end.