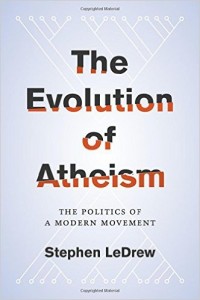 Stephen LeDrew’s Book on the Evolution of Atheism has apparently asked the right questions – if I read Patrik Lindenfors’s considerations at Humanistbloggen correctly. (The Google Translate English version is actually quite readable).

What has become of the old progressive left? – was one of Steven’s questions. (It used to be so tolerant, so multicultural and critical, critical even of science.) What has become of this peculiar brand of nineteenth-century secular “Humanism” (that wanted to become the standard atheist community in the assembly of well meaning religions)? What is eventually this “New Atheism” all about? (It preaches a new brand of scientism, so Steven. It waves with its use of the evolution as the new scientific mode to answer all our more substantial ethical questions. New Atheism is, so LeDrew the sociologist, predominantly white, male and, if we are ready to face it, intrinsically misogynist, in any case openly Islamophobic, eager to support military interventions in the Middle East under the guidance of the US.

The particular problem of the Swedish Humanists

…is not that LeDrew is now living in Sweden where it should be easy to contact him for an interview.

The particular problem of the Swedish Humanists is that they have only recently risked a debate that had almost divided them. Should they embrace New Atheism? Should they give evolution more importance? The New Atheists were apparently doing a great job as modernisers. They are the ones who can presently develop a new agenda. And now this! an insinuation that New Atheism is actually not left nor radical (that had been the fear of old style Humanists) but conservative in the sense of US-American conservatism and neo-liberalism on an agenda one should have discussed with them before adopting them, if LeDrew is right.

Patrik Lindenfors, the post’s author, is confessedly both, a Swedish Humanist and a proponent of what Steve would stigamtise as “Evolutionism”. The very word is an insult. Stephen LeDrew, so the summary of what one could make of his argument (if not of Jonna Bornemark’s argument, for it was her report one had to rely on) had apparently no clue of what he was talking about –

And the insult of scientism, that arch enemy of the Humanist movement? Well, positivists have been spreading scientism. Humanists are on the other, the good side, the side of benevolence even the teachings of new evoultionary biologists.

It took Ulf Gustafsson, co-blogger on the site, a minute re-appear with more substantial information about Steve’s book. There was an interview out there. The man was apparently confused and on a personal vendetta:

The impression I got from this interview is that the book is a political project (or therapeutic). He is an atheist and uncomfortable with some views of the atheists who get this media attention and he expresses the wish to do something about this.

A little ironic to be published on a blog that seems to advocate positivism.

“Within less than 200 years positivism has turned from a challenging philosophical point of view into the mainstream of scientific thought.”

…who have never heard of the Church of Humanity? The sinister trap is, of course, Auguste Comte.

You think he was the man who wanted to turn the scientist into the new “priest”? No. he was actually the man who was dreaming of the “Religion of Humanity” – a post-atheist church that is today the historical root of this entire movement of modern secular “Humanism” with a capital H.

Thing is: Comte was interested to leave the entire debate of atheism – not with the desire to become a Catholic again. Comte was rather annoyed of the theological debate he would have to continue in further proofs of atheism. And here I read in Partrik Lindenfor’s blog a nice little list of the deeply theological concerns the New Atheist has to defend – concerns which the sociologists LeDrew is not even interested to acknowledge, so Lindenfors.

The massive problem all this should pose is that the same Comte was actually convinced – against all the advocates of scientism – that he could make school medicine and many of the other fields of scientific exploration dispensable with the introduction of his surrogate religion. Once the “High Priests” of Humanity would rub the collective and the individual soul with the balsam of admiration for and love of humanity all our medical conditions would begin to disappear. Nuclear physics? Astronomy? Darwin’s theory of evolution? All this was intrinsically superfluous in Comte’s view. Mankind was well advised to focus on the here and now and our social needs. We would invest in poetry and sculptures, in history courses and Comte’s new science of sociology, so the intrinsically anti-scientific agenda.

But scientism in itself is positivistic? – it uses the positivist methodology? It is the belief that we will eventually have nothing but science, a world of technocrats who are confessedly unable to acknowledge the very existence of human feelings, of the very ideals of humanity we harbour as human beings. This positivist reductionism is what the true Humanist will always reject, or isn’t it?

Well, that is not quite the reason why Marxist, Leninist and Stalinist researcher, why Nazi biologists and the scientists who are working today for corporate capital are ready to dismiss positivism – the positivism of Comte, Mach, Einstein, Wittgenstein, and Foucault (to use the wider label).

Why would they despise these? Because these people have been spreading a dangerous “relativism” and sterile considerations of the limitations of the entire project.

Whether you quote Comte or Wittgenstein, they focus on the observable, on the how? instead of the why? and they feel uneasy about any idea of an “absolute truth”. Comte is ready to consider that our very theory of gravitation is basically a construct of “relative” historical validity. Mach, Schlick and Wittgenstein consider the validity of scientific theories and statements – in a massive attempt to limit the scientific project from within. They raise in this exploration an awareness that everything beyond (like our ideas of causality, our morals, our appreciation of art…) will actually be non-scientific, strictly speaking: arbitrary, voluntary, perhaps existential, open, a field of drastic responsibilities, and of a freedom we might want to defend.

Man has to awaken to wonder – and so perhaps do peoples. Science is a way of sending him to sleep again.

Was it Comte who said this? …or maybe Wittgenstein.

But is it not cool that we can prove that evolution has made what we are and that even our finest cultural achievements are subjected to an ongoing cultural evolution?

That is not quite the philosophical problem. The philosophical problem is whether any such proof can take the step from observation into the higher sphere of advice we should accept from the scientist. The evolutionary biologist, who knows what is best for us, is rowing in the same boat with the early modern Christian historian who could still read God’s decrees out of the historical accidents. He sits in this boat with the proponents of the Enlightenment who could see the bigger historical refinement and felicity we should want to achieve in our own interest. You can have my Comtean view of the Law of Three Stages, or fight with Marxist philosophers who know that we are heading towards a revolution and into a bright future of dialectical materialism – to be praised from then onwards as the singular bond between philosophy, history and the modern natural sciences. It will not be much better than to eat all the products which Kraft and Nestlé scientists advise us to eat with the approval of science.

But philosophy (and in that case positivism) is dead – isn’t it? Evolutionary biologist have to take over, haven’t they?

As Bill Nye has just claimed in this viral video – unable to offer a single philosophical thought which we have not seen around since the days of Socrates and Plato, vain and frivolous, nice in a philosophical debate but utter nonsense in science:

Our philosophy departments might actually close one of these days without much of a loss. Why not? Historically speaking we have seen this happen before. Philosophy exploded in the early modern era with an overload of theological questions to be discussed by modern philosophers – who would also be responsible for the natural sciences. It might well be that the most fundamental questions have in the course of the twentieth century silently moved into the hands of the latter.

The philosophical challenge to reconsider the limitations of ongoing research, of any form of methodology, of any kind of theorising… do not disappear in the same process. The classical university philosopher has indeed been increasingly dispensable wherever he speaks of Schrödinger’s cat and quantum mechanics. But those who do research anywhere at the border of present knowledge will, for simple and pragmatic reasons, continue the philosophical debate of the nineteenth and twentieth centuries. They may work as linguists on machine translation, as game theorists on economic models, as Google programmers on artificial intelligence, they may discuss string theory and the alternatives at Geneva’s Cern – they all have to develop progressive debates in order to cope with the intrinsically philosophical problems of their work. What exactly is the status of views we can produce in these fields? How do they relate to the “world”, to a “reality” that has allowed us to get the particular experimental results? What exactly can we prove with competing models? (The status of model assumptions has been the core problem of the positivist debate, and it is pretty much the problem to be discussed in any field of hard core research.) What is the status of statistical probabilities? All these problems do not disappear simply because traditional university philosophers can no longer act in these debates with the grace of the experts required here.

Nye is able to compete with the rivaling evangelical opponent Ken Ham in an attempt to speak on behalf of the sciences, yet he is basically as odd as Dawkins on homosexuality.

This is a crude circus and it might actually deserve a lot of criticism from within – a criticism we might continue to understand as a paradigmatic philosophical project.