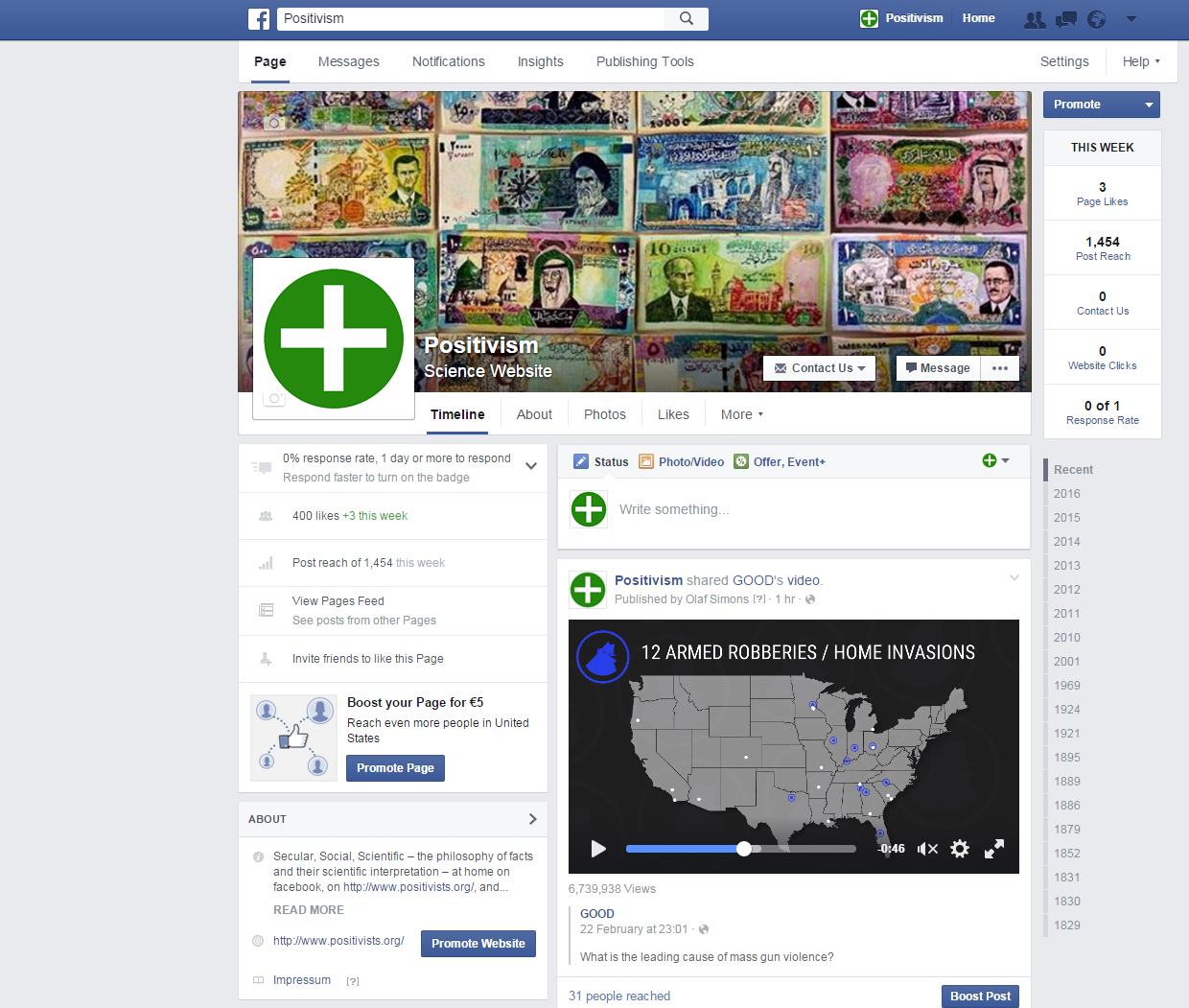 We have silently taken the 400 fans threshold this week with our Facebook page. That is not very much and I will make this a silent post just with a bit of statistics and insight. We are making 100 new fans per year. You really do better with an atheism fan page or a science page with personal touch. Positivism is odd, especially on Facebook where you would expect to find a page of “positivity”, of propagandist or commercial optimism under this label. I sometimes see new arrivals with personal pages full of optimism joining us, and disappearing after the first week of postings that are usually disturbing in the world as they want to see it. Here the development:

The project is beautiful mostly in its silence. It is run by 25 people (6 admins and 19 editors), but 5 people make most of the content without ever having spoken about why they are doing this – a site of personal freedom, curiosity and absolutely no stress.

It is still not quite clear what this site is actually good for: Facebook had categorised it as a “community page” but changed our status to a “science page” recently. Half of our postings are science in the widest sense of academic studies. The rest is political, social, art, and popular culture. The usual outreach of a post is 30-40 viewers (whatever that means) (Facebook controls these numbers, I spoke about it with more curiosity to get the statistics on Nov. 8. 2012 when we had reached the first 100 Likes.)

The maximum reach is in the region 1,000 to 1,500 people. We get these hits unpredictably if a high potential distributor shares the post. The news that Bernie Sanders might be an Atheist got us 1.1k views last week:

A beautiful info-graphic linking to this page of how the US banking sector reached its present concentration hs made 948 views since January 24. 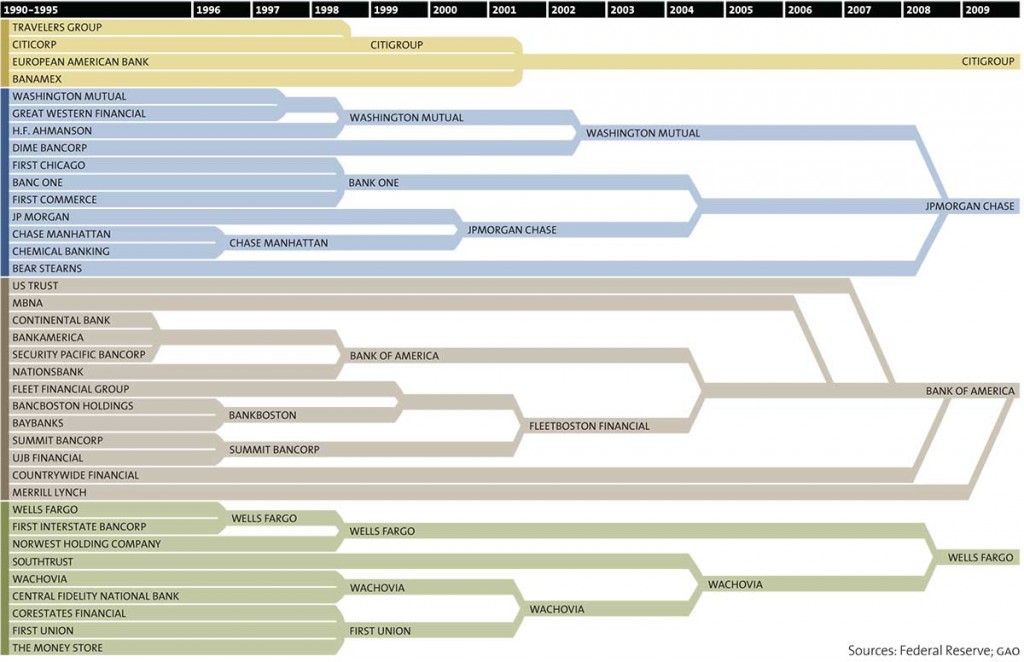 Another far less dramatic image made 942 views in the two weeks after December 18, 2015. The image sparkled a little series of different visualisations and a little debate. 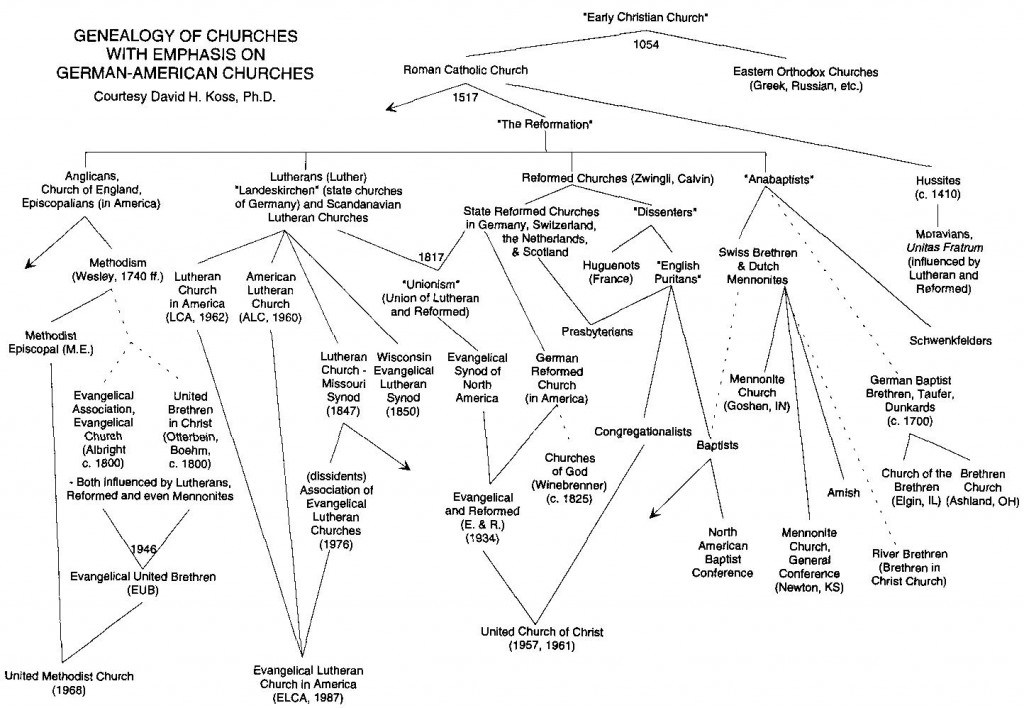 The 1989 BBC Wittgenstein documentary “A Wonderful Life” has found 455 people during the last week.

The postings do not give the typical picture. The page is curious and usually compiled with an interest to startle with facts. We have occasional arguments. Russia’s politics are sensitive. We can criticise the US to the mirth of our US audience, but our Russian viewers have moved into a state of self-defense over the last four years. Our fans are most active in the evening hours (seen from my German perspective). 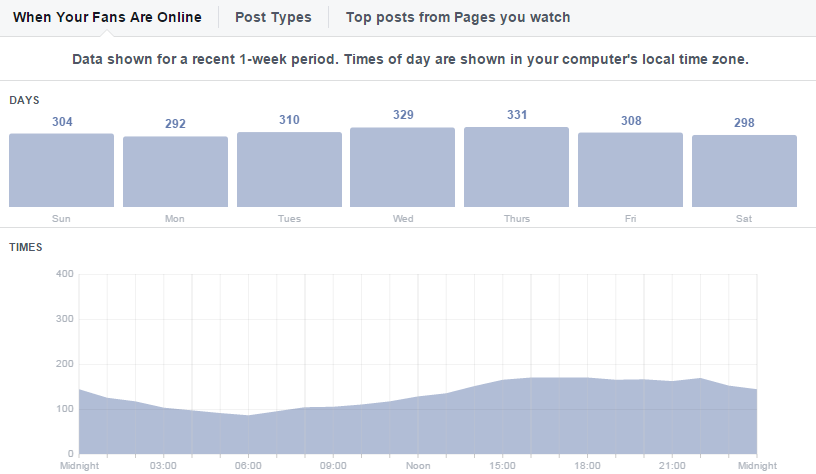 The gender composition has not changed at all over the last four years and is depressing. Exactly one third is female and two thirds are male. Our age profile has, however, shifted. Our audience is mostly between 25 and 34. The younger Likes come from countries of the Arabian spring, Africa or Asia.

Our geographical outreach has shifted as well. Brazil and Germany were the central countries in the beginning. I had probably generated the German fan base accidentally. Brazil had come with the interest of the Brazilian Positivist community of Curitiba. India has now overtaken Germany. Turkey, Mexico and Pakistan follow. 66 Likes come from predominantly Muslim countries, perhaps a sign of interest in the secular page with its curious distance towards atheism.

Some of our Facebook fans have opened accounts on this blog. See the We page for the clearer picture. This is after all the aim: to offer a platform for thought, debate and inspiration. The web page gives the option to become more personal or to show works as Ismail Ghanbari has repeatedly done (our Facebook page banner is part of his work). The blog is otherwise nice wherever it catches moods and insight into the views and lives of people who have basically only met on the internet. Topics have remained on our list: The future of nationalism. The future of atheism (has been a topic again and again). The Fate of the traditional left… Pacifism is on my list. The blog is the ideal platform for interviews. Think of whom you would love to talk to and we’ll tray to arrange this.

Here the table with the geographical details geography for all the Likes – helpful for those who run similar sites and who would love to be able to compare: