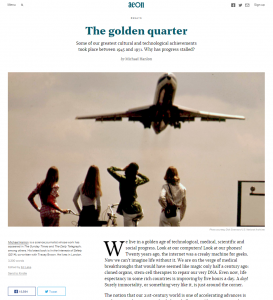 An Aeon article dated December 2014 by the late Michael Hanlon is trying to make some apparently interesting points, but when one goes deeper, it becomes plain that his analysis is based on a couple of false premises.

As Hanlon argues, it does look like lots of recent technological achievements are merely improvements of technologies which were invented long ago. Hanlon is right in saying that people today have become more conservative than people in the immediate aftermath of the Second World War and its associated episodes of brutality and barbarism. No doubt, as Piketty suggests, people have been trying, with some success, to make as much profit as possible out of as little effort as possible, so that the overall productivity has waned even in the field of scientific and technological advancement. Red tapes abound. This also helps make people more reluctant to take risks. The fewer risk taking, the fewer development in science and technology. Based on such a premise, Michael Hanlon urges people to stop scaremongering, to build more nuclear power plants and to make more genetic editing.

However, there are a couple of fundamental errors in the basic premises of his argument. Firstly, a distinction between a paradigm shift and improvement on an existing paradigm is less real than it appears to be. At least, scientific and technological progress cannot be equated with the making of a new paradigm. Secondly, people make decisions without knowing their full consequences. In other words, it is not that people used to be more robust than today to take risks to make greater discoveries, but that people used to be more ignorant of risks which they were taking. People today learn from the consequences of their predecessors’ trials and failures, some of them would be seen today to be more reckless than courageous. Thus, there are far more precautions today than before. But precautions do not necessarily hinder progress, do they?

On the first point, take an example of Professor Yamanaka Shinya’s discovery in 2006 that mature cells, as distinct from embryonic cells, can be programmed to get pluripotency. The pluripotency is an ability of a cell to develop into a variety of specialised cells, such as skin, hair, bones, bone marrows, blood cells, blood vessels, eyes, ears, nerves, brain, internal organs, reproductive cells, etc. The technology is known as induced pluripotent stem cells (iPS). They are derived from mature cells, not from embryonic cells, so that at least an ethical impediment, and a practical impediment, to the development of regenerative medicine have been removed. Regenerative medicine regenerates healthy skins, hairs, cornea, bones, blood vessels, blood cells, and potentially internal organs with which to replace ill or damaged ones for therapeutic purposes. If the patient’s own mature cells are converted to have pluripotency, there is no ethical problem of sacrificing an embryo, which is a human life, or human life potential, for the purpose of helping another. There should also be no immune resistance to replacement body parts which are made of the patient’s own pluripotent stem cells. Suppose that such regenerative medicine makes a new paradigm. Then, the discovery of induced pluripotent stem cells makes regenerative medicine ‘merely’ feasible, because regenerative medicine has been theoretically possible with the use of embryos. So, there has been no paradigm shift. Induced pluripotent stem cells simply ‘ease’ the application of the known theory. The discovery has turned something theoretically possible into something practically feasible. That’s it. But it would be wrong to say that no scientific progress has been made by the discovery. Professor Yamanaka was awarded a Nobel prize in 2012. Perhaps, Michael Hanlon cannot notice any revolutionary scientific advancement made outside Europe and North America.

Take an example of ebola vaccinations. We may simply be relying on the old paradigm of vaccination, first became known in Europe by Jenner in 1796, but medicine has to meet new challenges every day and night constantly. It is simply wrong to consider a paradigm shift is inherently superior to incremental improvement of existing technology to meet new challenges. In addition, studies suggest that small-pox vaccination has been known earlier in India and China. What is great about Jenner is that his methodology has become widely and professionally available worldwide. The difference between the known technologies in India and China, and Jenner’s discovery may be contrasted with the difference between the discovery of a new method and patenting of it.

On the second point, it is quite unscientific to say there is ‘clean’ nuclear energy. Nobody knows how to make nuclear wastes clean and safe. Michael Hanlon takes efforts to downplay the nuclear disasters at Three Miles and Chernobyl, and ignores Fukushima completely as if something happened outside Europe and North America is nothing. People are more concerned about the long term effects of exposure to radiation than those deaths whose causes are readily attributable to the accidents in the most restricted analysis such as Michael Hanlon’s. Yes, there are lots of scientific uncertainties. But people have come to know that they are grave uncertainties. People have learnt that there is limit to science, knowledge and skills. People have generally been aware of human fallibility, even if some might forget about it. People know that the accidents in Three Miles, Chernobyl and Fukushima could have been far worse. People know that the Three Miles plants are yet to be decommissioned at a huge public expense, and that the disasters are still going on in Chernobyl and Fukushima. People know that the situations are hardly under control. Therefore, people are worrying. This is not scaremongering. Nuclear reactors generate new radioactive materials which would remain lethally radioactive for millions and billions of years. In other words, they would not become clean and safe within the life span of our species, let alone, that of our civilisation. In other words, they remain highly toxic permanently for us. Nobody knows how to contain them permanently. Nobody knows how to detoxify them.

In a sense, ignorance induced many adventures to proceed with some successes and failures. It often takes ages for full consequences of any scientific and technological advancement to come to light. For example, Albert Einstein visited Yukawa Hideki, the first Japanese Nobel laureate in physics, and apologised in tears for making an atomic bomb without foreseeing its use against civilian targets in Japan with horrible consequences. He passed away long before the disaster in Fukushima. As far as nuclear energy and genetic engineering are concerned, people are yet to learn full consequences. Michael Hanlon is simply exposing his ignorance, and hence, his recklessness in advocating more risk taking in the exploitation of nuclear fission, which remains premature experiments.