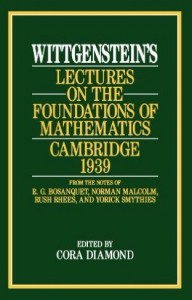 This is the first in a series of posts, outlining what I consider to be, especially interesting sections of philosophical texts. It is important to note, as Kripke does in his treatment of Wittgenstein’s work, that the positions hereafter referred to as Wittgenstein’s, are his as they struck me.

In 1939, the Austrian philosopher Ludwig Wittgenstein conducted, at Cambridge, a set of lectures on the foundations of mathematics. Present during a portion of them, was the esteemed mathematician and logician, Alan Turing. Since, Wittgenstein often engaged his class, he and Turing, at times, debated the ontology of mathematics. In one of the aforementioned exchanges, Wittgenstein proposes the use of mathematical invention as opposed to discovery.

You might say, “Come, a child when he calculates 25 X 25 and gets 625 doesn’t invent this. He finds it out.” Of course, he doesn’t invent the mathematical fact… But the analogy which springs to mind is that of finding something by making an experiment.”

Here, Wittgenstein is gesturing towards a differentiation by the contextual properties which usefully describe experiments or inventions. The analogy of experiment hinges on the observation, that the result of the specified case is not contained within its methodology. The pendulum swings, and heavy relativity comes to the fore, when one realises that we might call these symbols scratched on the blackboard, in one instance an experiment, and in another, the following of a rule.

If we consider Wittgenstein’s treatment of the standard metre, his point becomes clearer [1]. Discovery brings to mind, the uncovering of something buried: we imagine objective mathematical truths exist, and are stumbled upon through trial and error. Against this, Wittgenstein postulates that the initial invention of a mathematical method is an experiment, which devises a rule by which we measure its future application.

Suppose we in this room are inventing arithmetic. We have a technique for counting, but there is so far no multiplication… [Suppose we invent multiplication up to 100]… that is, we’ve written down things like 81 X 63 but have never yet written down 123 X 489.Is it possible for error to creep into the above process? It seems to me, that there is no right or wrong method of conducting multiplication at this junction. Further, once the rule is set, it makes no sense to call what occurs an experiment. “We say of a child, not “he has followed the rules in this way” but “he has followed the rules.”

Turing still does not agree: “What about the case of the man who can count and who cuts nine sticks into fifteen parts each and counts the number of parts. Then that is an experiment.” To which, Wittgenstein responds “Does it not depend upon the circumstances? Your man chops sticks and utters words; is this always an experiment?”

The mechanical line of thought Turing follows, clashes against Wittgenstein’s theory of a given calculations normative role, in which it is adopted in order to serve “as a standard for the description of an experiment”. Wittgenstein’s conception of calculation is not temporal, but a rule of thumb by which one measures certain states of affairs.

The disagreement continues, and is expanded upon against the law of contradiction. The contextualism of Wittgenstein, possibly inspired by Einstein, presupposes that there is nothing intrinsically wrong with contradiction [3]. Turing’s practicality forces him to press the issue: “The real harm will not come [from contradiction] unless there is an application, in which case a bridge may fall down.”

Here the implications are:

The focus is on the second case, though, this is not a problem to Wittgenstein’s position. One can assume: Fa ⇒ Fx.~Fx and then move forwards. The results from the next step decides which procedure will be taken on, and which will be discarded. Fa ⇒ ~Fx may be the rule used to mark a certain observation from a given perspective; and also become an axiom within the system.

Turing makes the point that a contradiction may lead to the bridge falling down, but not if there is one move, consistently taken to turn away from that contradiction. There may be a hidden contradiction within any system, take, for example, Peano arithmetic. There is no way to conclude, definitively, that there are no hidden contradictions within its set of axioms. But the method by which we navigate the trodden road, so to speak, precludes our finding them.

If Turing is correct, objective mathematical truth seems likely, giving weight to mathematical platonism. However, if Wittgenstein is closer to the mark, the applicability of mathematics is not a philosophical problem. It is a misunderstanding of the language game itself. And then, the real question becomes one of human behaviour, rather than abstract mathematical objects. One thing is certain: both positions deserve serious consideration.