Quora, and I have once again no clue whether it makes sense to give all the answers anyone could give. Perhaps in order to state that even Islamic terrorism might not be completely irrational, a simple dehumanization, the result of the Quran now taken literally by its adherents, the phenomenon of a lost generation of Muslims that grew up in the West without a chance to integrate…

(1) Muslims are not simply Muslims: Germany’s Muslims are mostly Turkish. If they bring a conflict to Germany it is the conflict between the Kurdish minority and Turkish nationalists. (Germany might actually have done a good job on this conflict with the understanding it showed for the Kurdd and with the recent support of Kurdish Peshmerga in Iraq – even if that support should be dubious on all other accounts.)

(2) Immigrants are not simply immigrants. France, Belgium and Britain, former colonial powers, have attracted larger contingents of immigrants who immediately formed post-colonial pockets. Germany has been a neutral country for immigrants with a Muslim background and it enforced a policy of integration on their “guests” (with moderate success, admittedly – Germany earned bad OECD and Pisa rankings on the question of integration in its educational system).

(3) Germany was – on the international level – careful not to show too much euphoria in the global war on terror. Germany opted out of the Iraq-invasion. It restricted its military support mostly to logistics and surveillance. Germany’s casualties in Afghanistan remained low. This has been noted in the Arab world.

(4) Germany has – to the dismay of its EU allies – advertised its open border policy in the recent “refugee crisis” loud enough to be heard in Syria and in Iraq. 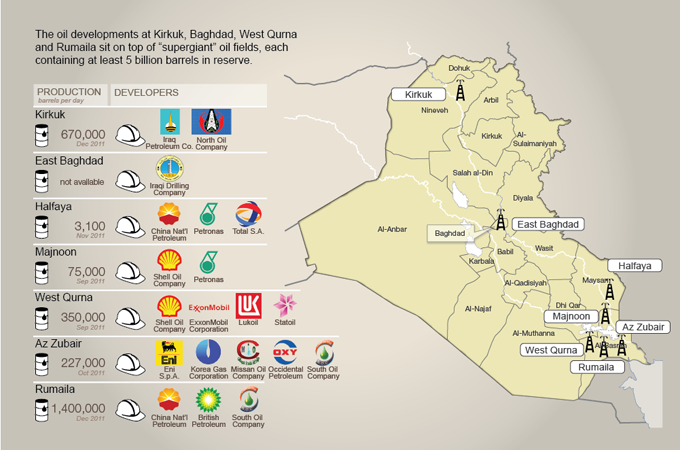 (5) Germany is not too openly involved in the exploitation of the Middle Eastern oil resources. If the map above should be the present map of Iraq, then this might be the conclusion: British Petrol, Shell, Exxon, Chevron and Total are importing both oil and terrorism. Germany loves to export the cars that consume all this oil, but that is another story.

(6) Germany’s nationalist politics of the last two centuries – the far longer perspective – have earned the country an enormous respect among the extra-European emerging nations that were looking for a model. The model was probably not the finest just as Germany became belligerent and troublesome on its admired course.

(7) The big problem on this list is Germany’s strong commitment to Israel. It earned Germany the 1972 attack of the Olympic Games in Munich and that is a dubious conclusion. Many people in the Middle East, united in their hatred of Israel, suspect Germany of being secretly proud of Hitler, the politician who was ready to exterminate the Jews.

Germany is under all these headings not the first choice – so the complex situation with all its ironical twists.

Postscript – a couple of Quora commentaries later:
Any insinuation that Germany’s secret services are just better since they have incorporated all the experience of the Nazi-Gestapo and the GDR-Stasi is bloody nonsense. Germany’s secret services – fragmented on the federal level, blemished by its policies of infiltration and hidden support of the evil they want to root out – are the target of a good deal of satire Germany. Maybe they are underestimated. One thing, however, will be true: Populists and the representatives of the secret services try to insinuate that they can and will eradicate terrorism as soon as they get the power and the money they are asking for.

Two things should be said against any such fantasy: If we manage to implement the Orwellian super state anywhere in the West that will be the state of the permanent terrorist threat. It will be the state that does not permit any other form of opposition and it will therefore receive this very opposition. It will at the same moment become apparent that it does not take much to be a successful terrorist. Anyone can kill some 20 or 50 people in a country of his or her choice and sell the atrocity as political activism. Our Western media are only waiting for such declarations. Children are easy prey, machetes easy to use. The interesting target will allow interesting messages and this will be the consideration before the attack, especially before any attack that is likely to cost the attacker’s life.

The simple answers given above might serve as a plea not to underestimate terrorism. We should read terrorist acts as a rational option of political activism. We should also understand that terrorism is to some extent market-driven. Terrorist acts have to sell on a market of news and political plausibility which on which we are at least the customers; we create win/win situations on this front.