Quora a question-and-answer website where questions are created, answered, edited and organized by its community of users. The company was founded in June 2009, and the website was made available to the public on June 21, 2010. Quora aggregates questions and answers to topics. Users can collaborate by editing questions and suggesting edits to other users’ answers.

I made my first Quora edit almost exactly two years ago and still do not quite know what to think of it. I am glad that Quora has kept track of my edits, I would not have remembered these my first edits on Nov. 30, 2012 otherwise. What had brought me to this website? I think the Google alert on positivism which I had set in order to hear of repercussions which this website might find. This was not a repercussion but a call to answer a question on positivism and atheism. Why not?

I was invited to register and did it with my Facebook account (though I hate the idea of spreading my profile information). Unlike Wikipedia (and that is what I appreciated) Quora took a decent step in order to avoid the battle of avatars, IPs, and people of all shades of realness. The climate on Wikipedia is stressful and terrifying for all real people who will rather not compete with such identities.

Once you are on Quora you are supposed to create a news feed as in Facebook or Twitter. Follow other Quorans; name your fields of interest; follow particular questions in order to see all the answers they receive… This is apparently not an open source of information; this is not Wikipedia, the online encyclopaedia which you access on a specific internet search. This is much rather a site of intellectual entertainment, the site of a stream of events.

A simple rule: You cannot both ask and answer a question

Q&A pages are nothing new, and they are not necessarily a bad invention. What is, after all, the massive value of Wikipedia handbook knowledge? Real research is problem oriented. Real scholarship poses questions and it answers the very same questions provocatively. Others, so the message of real research should have asked and answered these very questions long ago. And this is already the second big difference between the world of academic knowledge and the rather special Quora universe. You are supposed to interact and to play around in both roles, the role of the humble searcher of knowledge and the role of the self proclaimed expert who can help others.

“Original research” is the original sin in Wikipedia. It is clear why. Conspiracy theorists, self-proclaimed experts who would have no chance to survive the academic world are trying their best to turn Wikipedia into the platform on which their personal beliefs turn into general knowledge. That is why we at Wikipedia (I confess, I am still an admin over there) try whatever we can in order to build a threshold these people cannot hope to pass: the threshold of “You can only sell something as knowledge if it has been published in an authoritative book in the real world outside Wikipedia!”

Quora invites you to offer your personal knowledge. Yet should you offer it in a closed medium? How would you make sure that real original research of yours, expensive academic work, will be referenced properly by others on Quora and, more importantly, outside this tiny universe with all its fake exclusiveness?

The capitalist game Pierre Bourdieu should have invented

Quora is rather blunt with the social prestige generated within the community’s borders. Pierre Bourdieu’s cultural capital gets its solid currency of “credits”. I received 500 when I started back in 2012.

Go to a question. Take a look at the answers that have already been given, and give your personal answer. Others will begin to spend their credit with upvotes or downvotes of this your answer. Your credit begins to rise or to fall.

Give upvotes to good answers – that costs you credit but it will procure you the followership you need in order to gain credit.

A fake meritocracy meets the fake democracy of the free web

Quora is – just as Wikipedia – a man’s world and some Quorans are really big – like Jimmy Wales (“Wikipedia founder and Wikia cofounder, an advisor to and (very small) investor in Quora“) 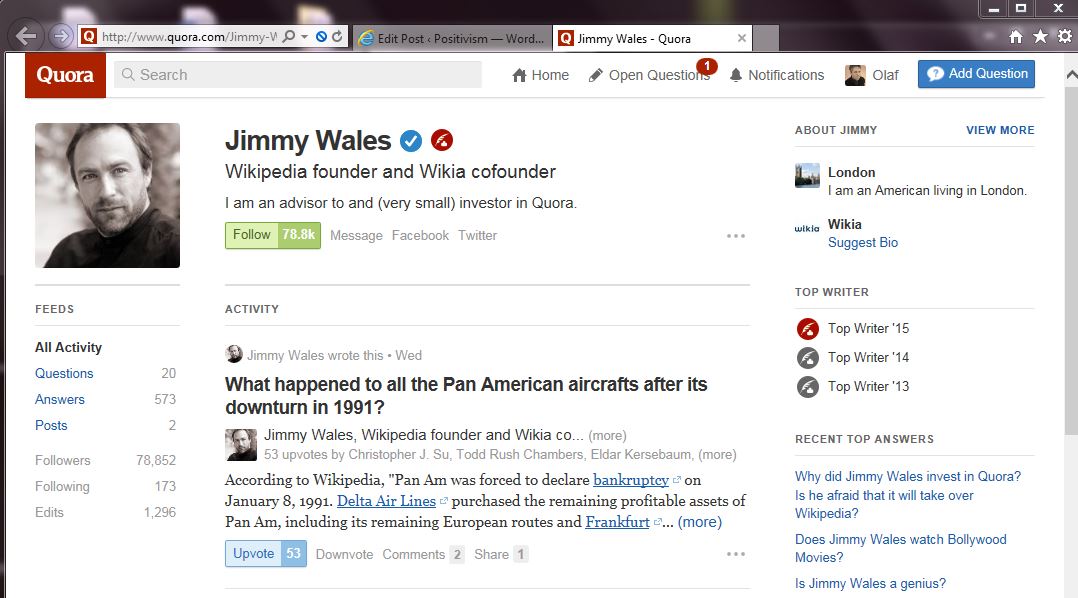 Jimbo has 78.8 k followers, that is 78,852 people who follow all his postings on Quora. Others are poorer. During the two years of my Quoran existence I have answered 105 questions, received a total of 19.4 k views (basically because one of the answers had been promoted by a 24 k Quoran). My answers received a total of 223 upvotes and 8 shares. All which earned me 3670 credits and 62 followers.

Become a Wikipedian and you will be striped of all your external social capital. You will act on a fully transparent platform, though, and that is the painful paradox, on a platform which only Wikipedians are likely to handle as what it is: a fully transparent platform. You can modify an article, others can see what you are doing. The community will intervene if you deteriorate their bigger work. You earn credit if you can defend your edits, you lose credit if you confess that this is rather your personal view than real knowledge…

Quora is again different. Big Quorans act as leaders of huge swarms of followers, yet the platform is not really theirs. There is somewhere a hidden “team” of organisers who might become interested in you, who might ask you for your opinion, who might advertise you as a “top writer”, who might even send you little pieces of Quora merchandise as this is a project that is waiting to be capitalised.

Wikipedia is a rough battle ground. You add your knowledge to the big cathedral with the promise that it is actual knowledge proven outside Wikipedia. You can defend your contribution as long as you can handle objections in discussions. The collective will otherwise “revert” your edits.

Quora is different: The organizers encourage you to state your personal views as just your personal views. Others will give you credit (or downvote your statements) but they will respect your words as words no one else will modify. (Mediators will intervene if you publish hate speech or pornography, invisible clean up work – again very different from Wikipedia where the entire arena of users will do the clean up work in acts of pretty open collective aggression.)

Wikipedia is a massive cathedral of collective knowledge. Quora gives you the taste of the virtual democracy of the world wide web, the taste of the global democracy in which we all should state our views as nothing but our most personal, humble and irrelevant but respected views.

Did ever anyone say that you can have stupid answers but no stupid questions?

Quora is a universe of increasingly stupid questions.

The best questions turn stupid once they are asked by lazy students who hope that others will structure their homework.

The medium of immense intellectual vanity

Quora performs best where you have a complex thing to be explained beautifully – let it be quantum theory, the Higgs Boson or Dark Matter. Here you will find physicists who have not only done their homework but who will present their knowledge with challenging elegance.

Quora is otherwise a platform of debate with the massive design failure that you never really reach the confrontational stage. Atheism is a big topic. Quorans raise test questions every atheist should be prepared to answer. Religious people are trying to enter this exchange, yet they can only add their contrasting views. The constructive debate would require the possibility to summarize what has been said thus far and to problematize the entire preceding debate in order to move it onto a new and more promising level. Quora-answers remain personal contributions, and the further down you scroll the more irrelevant they become.

It is no coincidence that the massive upvote collectors are rather triggers of identification than contributions to real knowledge. Tell a story that has “changed your life forever”. Tell the world the answer on the question “How do I get over my bad habit of procrastinating?” and you can make 26.6 k upvotes. (This is where I found the top upvoted answer on Quora thus far.)

The structural remedy would kill the entire project

Imagine Quora would not aim at your personal view but as the one answer a particular question should receive. I do not think that any Quoran would merge his or her knowledge into such a resource of collective knowledge. People want to read their answers as just their personal answers…

Which reminds me of the last of the four questions I answered on my first Quora visit: “Has Wikipedia reached its stagnation point?”

I knew (back in 2012) the data that could prove that Wikipedia actually is threatened by stagnation – and I remained relaxed. Wikipedia will solve these problems. It is too big to fail and it is growing as a monumental collective effort. I am not sure whether Quora is not actually stagnating. But maybe stagnation is not all that bad in a community that is looking for constant reassurance.

A postscript two weeks later: I eventually wrote my first beautiful story on the question of Why are Germans serious? and have doubled my credit in a process of viral appreciation. My success has rather increased my doubts.