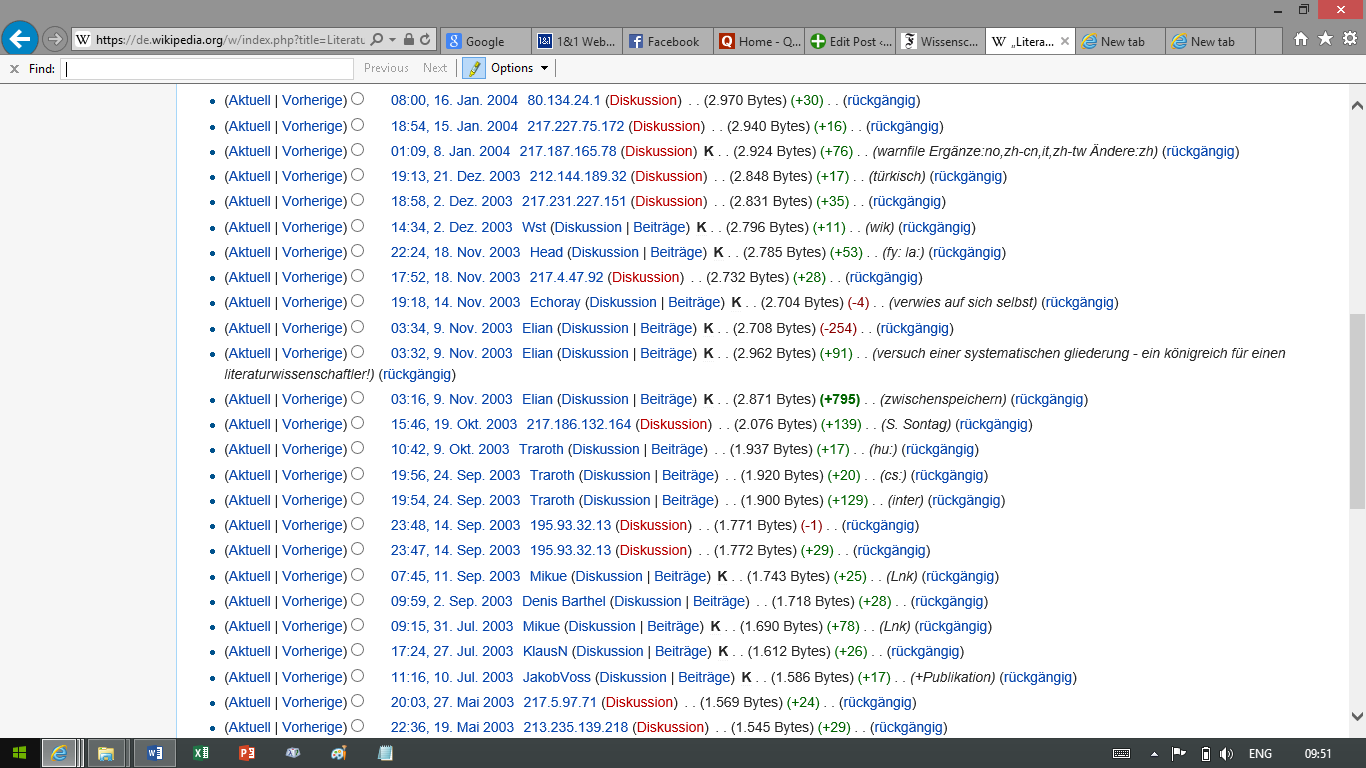 The following is an (abridged) English version of an interview I gave for Germany’s Frankfurter Allgemeine Zeitung on Wikipedia and why scholars hesitate to write for the online encyclopedia (their issue of April 9, 2014, last page). Friedemann Bieber is asking the questions for the FAZ.

FAZ: Herr Simons, you are a literary historian. In your free time, you write for Wikipedia. Why?

Olaf Simons: At first it was pure curiosity. After a year, however, I began to feel responsibilities. A couple of events in the fall of 2005 became decisive. All philosophical articles had to be deleted back then after an anonymous user had systematically fed copyrighted passages from a GDR philosophical encyclopedia into the articles. Hundreds of entries had to be rewritten. About ten people joined an online chat. We stated our philosophical perspectives. I thought that was the end – the beginning of battle on philosophical grounds…

FAZ: But that was not what happened?

Olaf Simons: No, we divided the articles among us. Everyone took articles he felt comfortable with, and within a few months we had entirely new articles – articles that were not just accumulations of different thoughts but designed to lead their readers through the respective topics. After that it was clear that there was a “we” responsible for Wikipedia – in our case the “we” of the philosophers at Wikipedia. It was just as clear that we would monitor from now onwards all the articles we had written. Our group was not just a virtual entity; we met personally and enjoyed the special climate of trust after all these nights of online contacts and collective work. I had become a Wikipedian…

FAZ: Did your Wikipedia authorship ever create a problem in your professional career?

Olaf Simons: Yes. In 2005 I was asked to write the article “prose fiction” (Erzählliteratur) for Metzler’s 16 volume Encyclopedia of the Modern Era. I invested a month’s work on fiction of the period 1400 to 1800. In the final editing process, however, someone of the editorial team noticed that my article shared much of its perspective with the far more extensive Wikipedia article “Roman” [also available in English – here under the keyword Novel]. The congruencies were no wonder. I had written the respective Wikipedia articles. My mentor at Metzler’s encyclopedia could prove that I was the author of these articles, but that did not save me. Though I had not plagiarized my Wikipedia work, and though I should been able to use at least the article I had written, I had turned my own work into a no go area. A serious scholarly encyclopedia such as Metzler’s cannot publish a text that is in line with a freely available Wikipedia article. As an academic author you turn your own work into useless common place knowledge on Wikipedia.

FAZ: Have you raised this issue among Wikipedians?

Olaf Simons: Yes. The answer was that this was entirely my problem. A Wikipedia article is not supposed to have an author’s point of view, let alone a basis in an author’s professional research.

I still think that there is no way to avoid the personal perspective in a field of greater complexity. Any more complex article in the humanities will be marked by personal methodological decisions and by the special knowledge the particular author will provide.

Wikipedians tend to think that two thousand people who have each read a single novel will compete with a single author who has read two thousand novels.

FAZ: Unlike many scholars you publish in Wikipedia under your real name. How do colleagues react?

Olaf Simons: Most of them frown; or they are amused because they can imagine that I would take such a risk. All professors I know use, however, Wikipedia in their daily work. If they find a mistake, they complain about the unprofessional medium, and that’s it. I’d say, we need a different culture here: Wikipedia is a collective card index box and we should all feel responsible for its quality and usability.

FAZ: Many scholars feel uneasy about the fact that anyone can modify their work in Wikipedia

Olaf Simons: Academic authors usually work for publications they will publish in a distant future. On Wikipedia, however, I write something and see revisions the very next morning. Writing in Wikipedia turns into a fast affair as soon as you see the immediate reaction as an incentive. And if you do not like the changes others have proposed, just revert them. Writing for Wikipedia is liberating.

FAZ: But there is an obligation to support statements?

Olaf Simons: Yes, every statement needs a citation, but you can find the most absurd individual opinions stated in research articles in the humanities. You may try to marginalize such peculiar views. But that can be very tedious.

FAZ: Have you had such an experience?

Olaf Simons: Yes. After the German Die Zeit had criticised the Wikipedia entry “Aufkärung” (Enlightenment), I was asked by fellow Wikipedians to revise this article – and rewrote it from scratch in 2010. In the ensuing weeks, I experienced unpleasant quarrels. One user was particularly persistent. He claimed that the driving force behind the enlightenment was a new bourgeois sense of the body which had developed on the dance floors. He began to rewrite the article. Other users added cherished stereotypes which I had just deleted. The article is today easily read as entirely my work – and I feel extremely uncomfortable with any such reading.

FAZ: Wikipedia articles are released under the GNU Free Documentation License. This means that everyone can copy your text, change your work and may use it commercially. Does that bother you?

Olaf Simons: No. This is the status quo for modern scholars; and then: I am paid by the tax payer. My own work should remain in the public domain. I will intervene if others recycle my work without quoting me – but I have exactly the same right under the GNU-license.

FAZ: But there are publishers who sell Wikipedia articles in books on demand.

Olaf Simons: Which remains a win/win situation and which is still better than the situation I normally enjoy. I am not paid by the commercial publisher who will eventually make money with my book. On the contrary: I will have to find an arrangement with those who already funded my research to also finance the publication of the final book. DFG money – public funding of research in Germany – will go directly into the pockets of the private German publisher. The only thing I will insist on is that other scholars quote my work properly, and that is what the GNU-License demands.

FAZ: But Wikipedia does not make any author statements.

Olaf Simons: At least not publicly and that is an immense problem. Wikipedians use a special tool whenever they have to identify the “main author” of an article – for instance before they rewrite more substantial passages.

This is the information you can get for the English novel article:

Within Wikipedia we accept that our articles have authors and we respect these authors – they can become quite famous among us. Our articles are non-author articles only to the outside world.

FAZ: Do you feel this needs to be reformed?


Olaf Simons: Yes. I think it would be important that more complex articles get explicit author statements. Our present Wikipedia “version histories” can no longer hint at the authors and an explicit author statement would not have to freeze the article. But one or more authors could now state to what extent they feel responsible for and comfortable with the collective work.

FAZ: And an author statement would not contradict the very idea of Wikipedia?

Olaf Simons: We are at a point where Wikipedia provides knowledge on a high level of quality. The German article “Russian literature” (the link shows the present version as of November 2013) is a lousy article after all those years and will not be improved by the community of regular users. Nor will a student dare to offer his or her perspective on this wide field. We need professors to share their views here. But which professor would risk his or her reputation on our platform? An author statement would make it attractive for professional authors to join Wikipedia. Wikipedia should become an object of collective responsibility and Wikipedia must on this course adopt the very standards of responsibility we use in our public debates for that purpose.