Ah, Paul, I am not quite sure about what to think of the present hype surrounding atheism (and humanism following closey in its wake). It’s turning into something that enjoys a peculiarly mixed support wherever we hope for an agency to defeat Christian fundamentalism and its appendage of bible-belt tea-party creationism. Richard Dawkins is appearing in how many youtube videos? The Christian front is all over the place with videos of debates in university halls where they claim to have defeated atheists in splendid confrontations. I have gone through some of these confrontations and was not a little surprised about the cheap victories celebrated in them. We get arguments for and against the existence of God with a neo-scholastic impetus, all with the usual challenges: “if God was good – why did he allow all the misery that happened in his name?” and we get the usual answers with their variously refracted echos of the Leibnizian Theodicee plus an extra bit of 20th century existentialism. My atheist friends are delighted to be so prominent all of a sudden. Here and there we see someone leaving such a confrontation with intellectual bruises, yet most certainly with the wish to return to the fray at next soonest opportunity. This is after all an intellectual chess game. One can study standard openings, necessary moves and try to anticipate all the mistakes one’s specific opponent is likely to make. 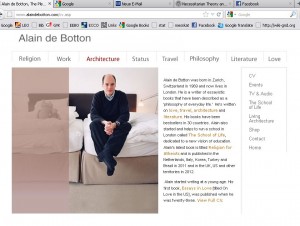 Alain de Botton’s website is so white and smooth. Click into the CV section and you see him sitting on his bed, a hotel guest in his own life – the new image of the intellectual who is ready to challenge the religions of the world with all their inquisitional obscurantism. The adjoining navigation offers the shop-link. The prolific writer is selling his books. There is definitely a market out there and the man is fully prepared to tap into it.

And London’s upcoming temple of atheism? The British Newspapers eagerly embraced this idea. After the atheist bus this is a nice thing to be shocked about. A picture is circulating with the news (Pillar of wisdom? … The Temple to Perspective, right foreground, proposed by Alain de Botton and collaborators Tom Greenall and Jordan Hodgson. Image: Thomas Greenall & Jordan Hodgson). It shows a black and white London skyline with an Orwellian John Hancock Centre casting its sinister shadow onto the elevated observer’s eye. This is the vertical Kaaba. Atheists will love it – so runs the message – and it will turn London into a futuristic nightmare.

Let me confess my piece of good old positivism (that will not surprise you here). I neither believe that all this is more than an exploitation of the present news climate, nor do I – 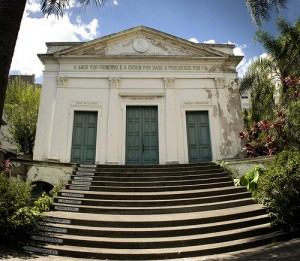 But haven’t positivists actually built such temples dedicated to an atheist religion of humanism? Yes, of course. And I confess, I love them. South America still has some of them left and they have become part of a cultural heritage we should cherish (just as we cherish Liverpool’s neo-gothic cathedral, one of the objects that appear in my most compelling nightmares). We should preserve them carefully – they are rare manifestations of that stream of thought that eventually led to Brazil’s capital Brasília (the capital designed by Matt Jefferies, the very man who would later on do the design for the USS Enterprise (NCC-1701) and who had designed the Citroën DS a couple of years before in 1955 in the rare cooperation with a literary critic, Roland Barthes). Have I dared to read Auguste Comte’s Catechism of the Positive Religion? Yes and was fascinated (again as a historian).

Which all was not the main argument that brought me into the far wider field of positivism. I read Heinrich Hertz’s Principles of Mechanics in my last school year – with the feeling that this was turning into an intricate answer to Kant. What fascinated me? That all this was designed to go far beyond both atheism and agnosticism. Hertz and Mach did not waste any time on the question of whether or not God existed. Their topic was how we should handle positive data as derived from experiments – and this question was asked with a clarity that allowed the reader to anticipate that God would not become a problem here. The very decisions Hertz and Mach considered moved God out of the zone in which he posed a problem. We would not interpret data (on the basis of Comte’s philosophy) in a way that could bring the transcendental into the game.

Put an object on a platform and begin to tilt it – when will it fall? This is the answer you will learn in statics: The tower falls as soon as its center of mass is no longer over its base.

Where would you like to see God in this statement? “God makes the block turn over, but he will wait with his final push until he sees the center of gravity having left the area of the base…”? Architects will not be particularly enamoured of this statement (for what happens if God changes his mind? How can we influence him in this law), nor will theologians be very appreciative at the thought of God entering the engineering classes with such sentences. (For what kind of god is this who will not bend his will to allow more fun in architecture?)

The sciences have moved into an area in which God will not enter their equations. As a historian, I am left to deal with Him as in my present research on the French general who felt that God had commissioned him to start the apocalypse in 1716. I read my General’s  publications, read them against the subtext of his private diary and analysed the extent to which Calvinist prophecies can be seen to have entered his thoughts. Not even theologians will expect me to give an additional answer on the question of whether I think God exists or not. The natural sciences and the humanities have left the arena of that debate and turned positivist. Sociologists will try to find out why some people believe in God and others not, without touching the problem itself.

To return to the question of whether the temples of atheism are to be feared or welcomed.

I feel that those discussed by Alain de Botton are simply empty projects – serving only those who enter these debates. If you really want such temples, then support the last of those still surviving. Take care of the positivist temples and the Chapels of Humanity in Paris and Rio and where ever else they are left, and promote their addition to the list of World Heritage Sites.

And as a further thought added in hindsight. Comte’s idea was belated in the 1840s and 1850s. The wave of truly secular and atheistic temples had by that time swept through the catholic and protestant Europe.

This is what Munich’s central area looked like in the 1790s and what it eventually looked like a generation later. On the image above you see the court’s city palace next to the area of the old city monasteries.

In 1802 the (Christian and Catholic) court decided to demolish the neighbouring monasteries, and to seize and secularize their possessions. Space was created for a new palace front and the National Theatre. Building started on October 26, 1811 – inspired by the model of a Greek temple. God did not seem to like it, a fire destroyed what stood there by 1817, but the construction was resumed. The theatre opened in 1818 only to be flattened to the ground by a struck of lightening and an ensuing fire on January 14, 1823 – which did not change the authorities’ determination to have it built. Visit the 19th-century part of their palace. The interior reflects the determination at work outside with a visual program far more problematic than the one Comte proposed. We get fictional scenes from German plays, poems and novels on the upper floor and the medieval epic of the Nibelungen on the ground floor with scenes of horror and violence, all fully secular and designed to create new room for interpretation, sense and identity on the grounds of the destroyed clerical. 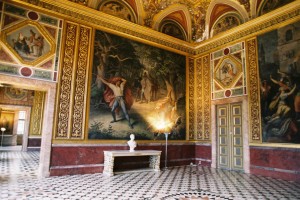 Compared with all these temples I do love the positivist temples as part of a heritage we see with a far greater distance, even with humor – no, honestly, I quite like them.

2 Replies to “On the Temples of Atheism”