[Olaf Simons, Gotha, Germany] Discussing creationism with pupils and students is usually difficult. US teachers are, as far as I can see, all too well aware of the fact that they have a fair amount of proto creationists in their classes. The situation tends to be embarrassing. Nine or ten year olds cannot offer much more than views they have adopted from their parents. Should you as a teacher attack their beliefs?

If you are a university teacher and realise that you have creationist students in your class (I had them in classes on the early modern period) you are in a slightly different but equally uncomfortable position. The individual creationist will be lonely and a target of puzzlement. Speak to her outside class, tell her that she was courageous to confess her view and she will be delighted; she will feel you should really meet the circle of evangelical students at your university and she will offer you some books and DVDs, so that you can see: real scientists have joined the creationist camp!

The promotional materials are – you are likely to realise – cheap propaganda, easy to dismantle as such. The authors are playing tricks on an uneducated and uncritical evangelical audience – well, not quite… They are playing tricks on an overtly critical audience whose criticism they recalibrate and turn into a new anti-evolutionist, creationist creed of those who ware allegedly critical of everything you learn in the media and in western secular educational institutions. As a university teacher you do not need a PhD in biology to deconstruct the individual creationist arguments; they are mostly cheap tricks; those who create these materials are far from becoming convincing – they keep on failing to convince educational authorities all over the world of the need to rewrite our biology text books. Yet all that insight is of little help.

If you risk the controversy with your creationist student you will run her into a desolate situation. She will tell you that she is not really prepared to discuss this particular topic on the level you propose. She, personally does not have the scientific background nor the historical knowledge to defend creationism. But one thing should seem convincing, so her steadfast claim: The authors of creationist books have all been evolutionists before. Each of them had his personal moment of revelation, when he detected the first flaws in the theory of evolution. Eventually they all realised that the “science” of evolution was unsupportable – and only then did they become a creationists. Should not that disturb you as a scholar? Maybe you will become a creationist too, when you detect the first flaws?

That is basically what convinces the massive 46% clientele behind the present US-statistics – and the smaller numbers of creationists you find in corresponding European circles. They are followers of authors who supposedly have the knowledge, a knowledge followers themselves do not require. 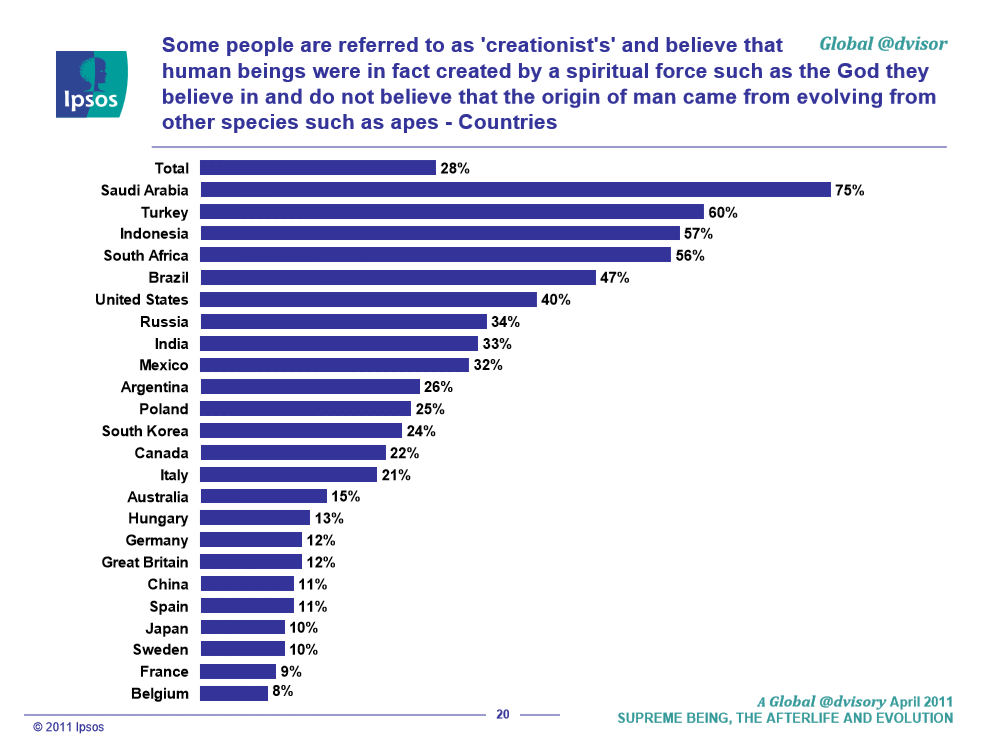 One should hence focus debates on the authors – and on the question, why they are so convincing among this particular clientele. The authors need to be challenged coram publico. And their audience? Do we need better science classes in order to reduce the market for creationism? Probably not. We will probably not reduce the percentages of creationists in Western populations simply with more information about the “truth” of evolution. We will rather run the risk of raising their numbers if we keep on banning creationism from our school lessons. And we will raise the numbers of creationists if we think we can solve the problem with a concerted effort to school the innocent next generation of pupils. They will develop the same readiness to watch out for the counter narrative, so the paradoxical situation.

What then can be done?

Our knowledge of the evolution, our pictures of dinosaurs, the flood of pro-evolutionist perspectives create the fertile ground which authors like Ken Ham are tilling at the moment. They instrumentalise “evolutionist” research to their purposes. Since not to teach evolution will be even worse (it will look like creationism has won), there is only one option left: We will have to deal with Kan Ham and his allies. And we will have to make sure that we will not treat them as scientists of their own right on that way. They are producers of a counter narrative and have to be treated as such and they are extremely weak as Bible scholars and as historians, and that has to be made clear.