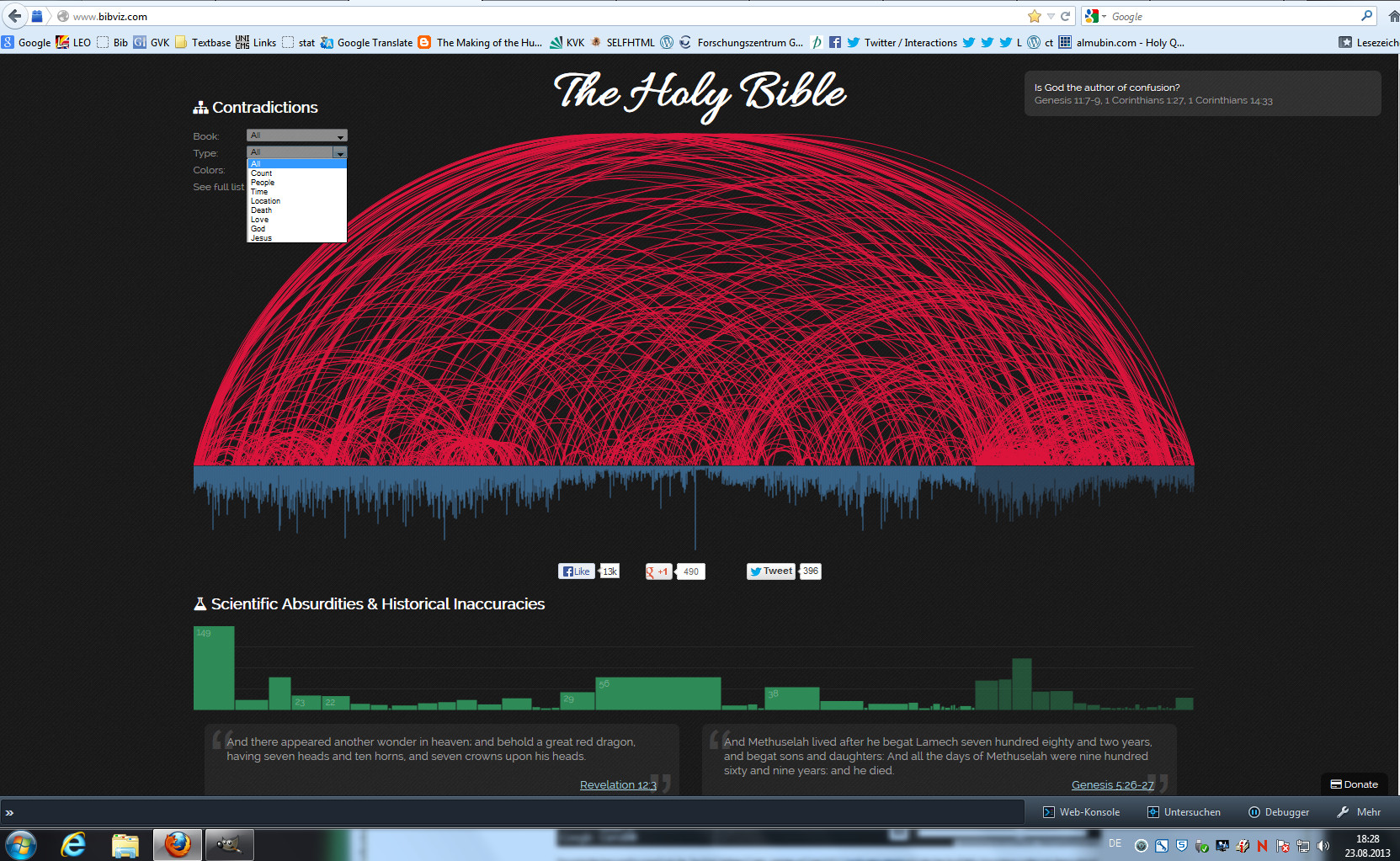 Quote from the page:

This website aspires to be a beautiful and interactive resource for skeptics and believers alike to explore some of the more negative aspects of holy books.
It was heavily inspired by the Reason Project’s poster of biblical contradictions, which in turn was inspired by Chris Harrison’s Bible Visualizations.

[Olaf Simons, Gotha, Germany] And indeed, what an effort of web design: A visualisation of all the contradictions you have to swallow when reading the Bible. And much more! You can spot all “Scientific Absurdities & Historical Inaccuracies”, all the displays of “Cruelty & Violence”, all the cases of “Misogyny, Violence & Discrimination Against Women”, and you can eventually use the site to name all the Bible’s instances of “Discrimination Against Homosexuals”. 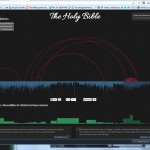 Systems of internal references within the Bible are not exactly new — most Bibles have concordances and indications of quick cross references normally at the margins, usually designed to show that the Old Testament is truly fulfilled in part two, the New.

The page has a pronounced atheist rationalist background — but otherwise? I’d say it is truly an inspired work of Protestant, evangelical, pentacostal, unbelievably naive Biblical literalism. No Jew would accept the page’s premises. Why should a Jew assume that the thing Christians call their New Testament actually is part of the same “book”, the fulfilment of the Tanakh. And why should anyone else assume that the Bible read as one book is in any way comparable to the magnificent, the deivine, the truly inspired Los Angeles Telephone Directory — a work of a coherence only God coul provide. (Hope they really still have a print version of their telephone directory in Los Angeles… I should have checked this.)

The designers of the interactive site are obviously reading an evangelical version of the Bible, one with God’s colophon on the last page. (Jewish Bibles tend to omit this Statement.)

“This is my book as I have begun it with Genesis and ended it with my the Revelation. I wrote it entirely by myself, and cannot see where I should have contradicted myself.

wise and all knowing
yours faithfully,
God
him and herself.”

OK, let’s assume that the entire web project is not so much working on the frame of mind the Bible wants us to get but on a frame of mind Christian evangelical pentecostal Baptist groups have been trying to spread (groups that do not suppose their readers could develop a sense of the Bible’s magnificent lack of cohesion).

Yet, if you are a Jew or if you are a Jewish atheist (it does not matter what of the two you are) you will not share this frame of mind, and the entire set of demonstrations will stop being that breathtaking. And if you are a Lutheran orthodox or Catholic Christian who supposes that God is acting on a complex historical plan and that he has revised his very own statements in the course of events when he decided to see his son die? Or if you are a mystic Christian of any denominaton who loves these contradictions since they give us a mild taste of God’s infinite puzzling intellect? Well then this site is not proving God or the Bible wrong but rather showing us how weak atheists are where they but try to make sense of the slightest of these “contradictions”.

Atheism is, so it seems, a frame of mind built on options religions have to provide. These can be absurdities, brutalities, inconsistencies. And it seems, these absurdities can be more or less sophisticated. Evangelical-literalist-atheism is probably the most boring of all atheisms. Jewish atheism is an intriguing frame of mind — an option that is already provided by the Old Testament (apologies for using that work, I am a Lutheran atheist) in a broad variety of perspectives that have been ready to be adopted for the last 2500 years. Read Ecclesiastes — here it starts with the words

…a book within the Bible, full of contradictions on its very few pages. It feels like those who wanted to integrate this particular book took some pains to add some more mollifying sentences here and there in order to make it more acceptable. In its core it is rather godless.

Maybe we should be grateful for the invention of God, the monotheistic entity. Once it was there it had to be developed. Things had been simple with Zeus and Thor. They had been characters within their respective stories; and these stories were as closed as the stories of Catholic saints. But God, the monotheistic entity? Once this entity started to become responsible for history, things got immensely messy. History does not repeat itself. As long as he was responsible for the fate of his chosen people only — well, that was already complex. But as an entity behind world history? Once God assumed that responsibility he really had to develop. We had to develop him if we did not want to continue, let us say, witch hunts for centuries to come. We would modify our picture of him and stop these atrocities now that we had realised how dramatically we had misread his book.

Is God designed to allow us to learn from history? Maybe. He is doing lots of things in all the debates he enters as a concept.