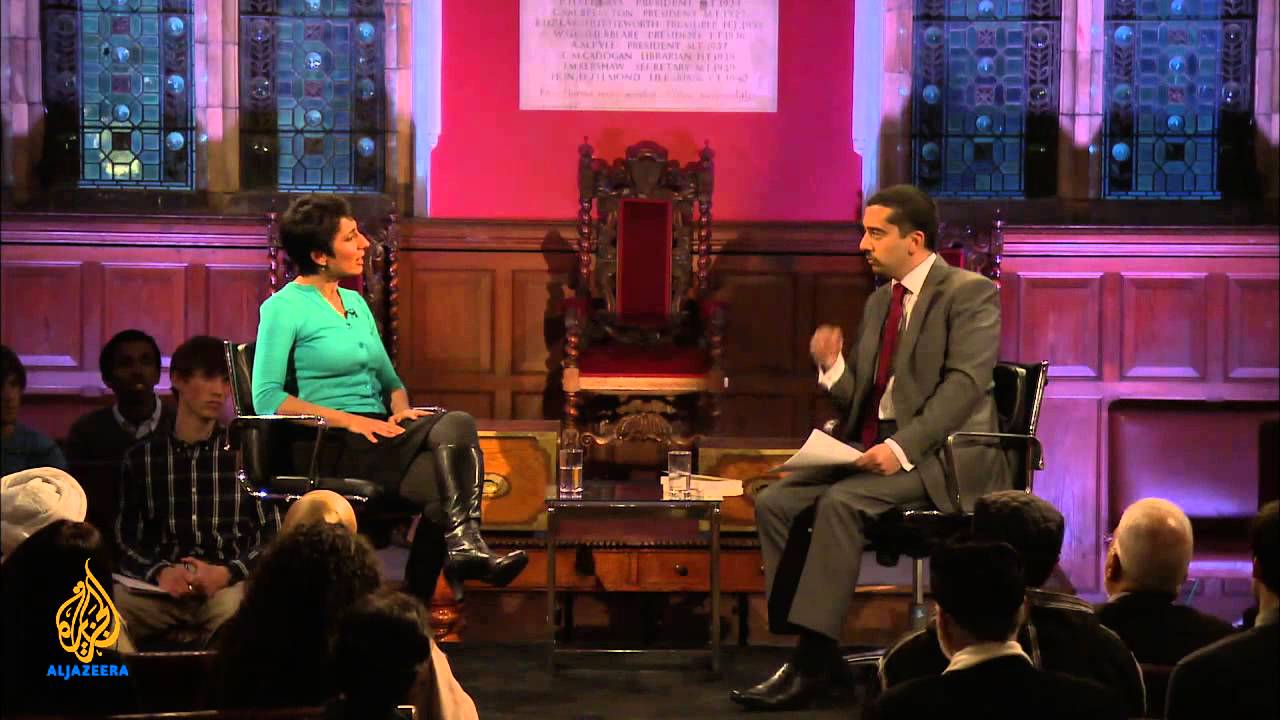 Posted yesterday by Al Jazeera English on YouTube: Mehdi Hasan talking with Canadian author Irshad Manji in Head to Head at the Oxford Union. Irshad Manji published The Trouble with Islam Today and Allah, Liberty and Love on the need to reform Islam.

I followed this debate after weeks of a debate in a Facebook group on “Afghan Women and Their Rights” and found it fascinating. The problems Manji and Hasan are discussing are the very problems we had been discussing in the Facebook group. The solutions puzzled me and I do not quite feel that they will be final.

The Facebook debate eventually circled around the question whether at all one can criticize Islam. We had basically three groups to which we can now add a fourth:

I’ll briefley look at the four positions in the following and add a few German thoughts in a separate post. 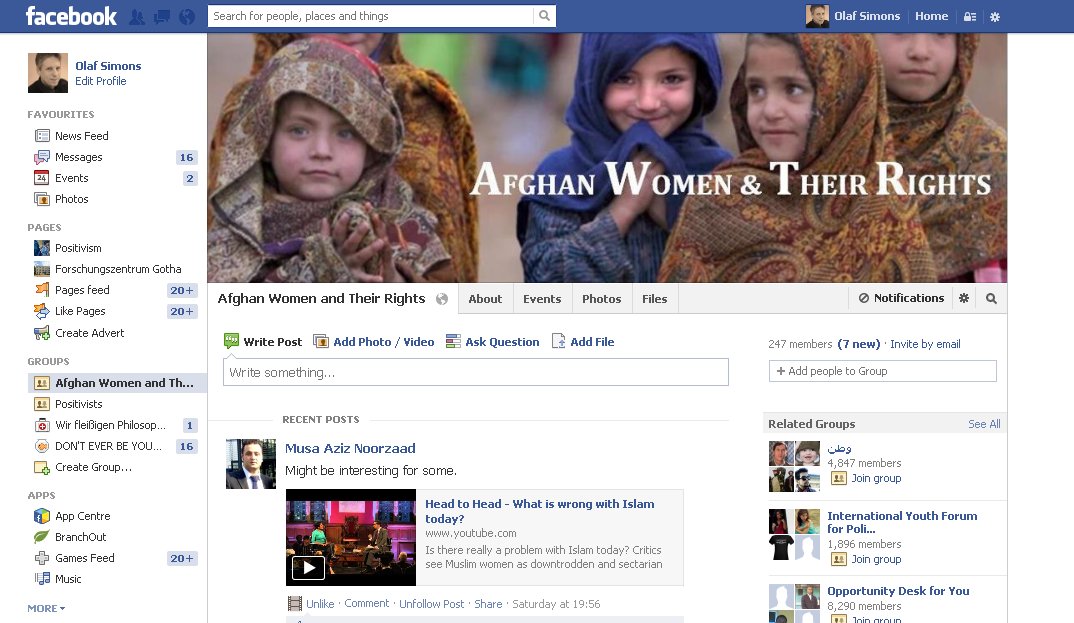 The main position is here one of honour and self-defence in various forms. The sub arguments are known: How many Muslims are extremists? Only a few. So why should all Muslims see themselves in a need to justify themselves? Do we have Christian violence? Yes. And why do Christians not have to justify their religion then? And who is calling us Moslems for this justification? The West. If we criticise ourselves we only help Westerners who are already discriminating against us. Let us, hence, not offer them the internal debate they will exploit.

The problem of this position was easily reached within our group – a group established to discuss women’s rights in Afghanistan. You get a regime of internal censorship as soon as the first voices moderate individual speakers to be silent now since non-Muslims are watching. Certain things, so the message, can only be discussed internally, but who decides who is in and who is out? Eventually the opinion leaders create a climate of oppression within the entire group. Each and every one has to stand together and to defend the entire community against any criticism from without. Liberals in the group anticipated this situation and used pseudonyms to speak more freely. They risked to appear as traitors within their own Muslim community.

Strange denials entered the debate: the notion that the West has caused all these troubles, a denial of debates that have emerged in the Arabian Spring.

Somehow this position is almost a problem solution. You can acknowledge all the problems you see and draw a line: All these problems have nothing to do with the Quran nor have they got anything to do with Islam, the religion of the very best precepts.

Our Facebook debate went into the hard and unpleasant facts of living conditions and moved into a direction of remarkable theological demonstrations. The Quran itself, so the demonstrations was and is the book of the avant-garde especially in the human rights question, in all questions of religious tolerance and gender politics. Websites were posted — urls such as this one of an Islamic cleric who proved how good the situation of women was effectively under Islamic rule, under the rule of a religion of unconditional precepts of honour and respect:

The group was not certain whether they all agreed on such web propaganda. The glorification of Islam was, so their view, besides the point. The internal Islam critics quoted Quran verses that did not speak of any tolerance. The defenders of the faith quoted scholars who had allegedly proven that these verses were misunderstood and read out of context. The Quran has fundamental passages which all people of good precepts will sign, and it has other passages you can only fully understand if you read the respective passages in the commentaries. You should leave the interpretation to scholars and read their papers, so the internal battle.

I felt uneasy within this battle because it is weak where it resorts to theology. Those who support the Quran transfer their own power as readers into the hands of their preferred experts, and it turns out that these experts will not gain any full support in Islam on a global scale. Extremists chose their own experts, and these win as they can quote the Quran without much more learning: it contains tough and unconditional passages, full stop.

I was in this debate surprised by those who defended the book. They had hardly read it from cover to cover. Simple grammatical questions confused the professed readers: Who is talking to whom in this book? “God to mankind”, I heard. Yet reading sentence for sentence it was not that clear whether it was God to mankind or the prophet to men about women — basically as objects to be respected in some cases but not in all. The entire debate about respect turned out to have its terrifying aspects: A woman, this was even consensus among the women, could of course do things that would spoil her reputation. Respect would then be no longer granted. Human rights, unconditional respect (even of prostitutes and adulterers) was not on the agenda.

The entire debate eventually circled around a rather virtual religion (a Quran of cherry picked precepts and of a text that was otherwise ignored) and a society this cleansed religion would eventually establish: a society in which men and women would fulfill the simple and good commands of this book.

3 | The Position of dissatisfied Moslems: Criticise Islam, the Prophet, the Quran

In our Facebook debate – most participants had a Moslem background, most are Afghans living abroad or in Afghanistan – we had a third and uncoordinated group of dissatisfied Moslems if not ex-Moslems who began posting anti-Islam YouTube videos and Facebbook pics of a peculiarly low quality of argumentation, designed to discredit the prophet and his believers. The problem was that the internal critics found the most unpleasant bedfellows: The global community of Atheists uses the same ammunition together with Christian fundamentalists and fascist ‘white trash’ – a very unpleasant melange one would not like to enter.

4 | Irshad Manji’s Islam, the religion of “Ijtihad”, of the individual and critical thought

Irshad Manji confronted Mehdi Hasan in the Oxford Union debate with her readiness to actually criticise the religion of Islam, not just those few extremists who are supposedly “mislead”.

The question she could hardly answer on this path was: how would she define Islam once she started criticising “her” religion (she remained adamant: she would stay a Moslem)? Her answer was radical: The religion had to be defined by the behaviour of its adherents.

Mehdi Hasan reacted with unease: So you allow each and everyone to define our religion by his or her behaviour? Moslem extremists become representatives of our religion? They define what Islam actually is?

Irshad Manji defended her step and went into Quran-bashing. The entire religion had a problem, so her view, if people could use it as their weapon in crimes. As soon as they killed in the name of Islam they created a problem all of that faith. She classified herself as no “Muslim moderate”, as rather a “reformist”. Her point was that this religion had to be reformed.

The debate touched the question of Moslem violence. Could one blame Moslems in general? Should one not acknowledge that moderate Muslims repeatedly denounced all acts of violence? Irshad Manji remained critical of all the excuses:

moderate Muslims do denounce of violence that is committed in the name of Islam, very much so, but they deny that religion plays any role in that violence. The very first thing you will hear from the moth of a moderate typically after an act of violence committed in the name of Islam is: “Please don’t misunderstand, Islam has something to do with this”, but that’s not true. Because those who are committing the violence cite Islam as their inspiration. What reformist Muslims do, is that we acknowledge that there is violence. But we also say that “The way in which some people are using our religion is that they are inspired by religion to commit that violence. In other words: When moderate Moslems say that Islam has nothing to do with this, they are the ones (in my humble view) who are seeding the ground, who are handing over the ground of theological interpretation to those who already have malign intentions. But we have to acknowledge that there are verses that terrorists are using and that they should not have the last word. You can’t do that if you say that Islam has nothing to do with this.

Can the Quran be criticised? Very much so, if you take Irshad Manji’s position. She is unhappy about how the Muslim world reacted on the 9/11 attacks and she is especially unhappy about simple solutions such as the familiar quote of Quran Sura 5:32. “If you murder one person it is as if you murder mankind.” Muslims cannot just quote such a line and feel they have done the job. The very passage is here already quoted without the rest of the verse. (The entire debate is recapitulated on websites such as this – compare the video 9:00). The Quran is not “sanitised” by just omitting the dark passages that follow. Irshad Manji pleads for criticism not only of “mislead believers” but of the text that seduced them

So I am saying that moderate Moslems cannot simply sanitise what does exist in the Quran. We need to get real, we need to get honest and we need to offer bold and competing reinterpretations of what is actually in the Quaran.

I began feeling uneasy here. The solution to the problem will be more theology then?

Irshad Manji introduced her concept of “Ijtihad” or individual reasoning as a core principle of the Quran. Everybody should read the text critically and apply his or her own thought. Sura 4:135 stated the principle of this fundamental criticism:

Believers, be the supporters of justice and testify to what you may have witnessed, for the sake of God, even against yourselves, parents, and relatives; whether it be against the rich or the poor. God must be given preference over them. Let not your desires cause you to commit injustice. If you deviate from the truth in your testimony, or decline to give your testimony at all, know that God is Well Aware of what you do. [Quran 4:135]

Will that solve the problem? Will it not force critical thinking back into a range theologians have to define? And will Irshad Manji not fail to prove that “Ijtihad” actually is the dominant doctrine of the Quran?

Most of the book is about Ijtihad it’s about thinking creatively and independently and this is a tradition within Islam in itself so in fact there is nothing wrong in Islam that cannot be corrected by what is right in Islam.

Would it not be far more interesting to state that the Quran allows critical thought rather in precarious limitations – in limitations we might have to overcome? Can we actually “take away all malignant interpretations” by new interpretations? And should we do this if we are interested in the text as it actually is (my humble question as a historian interested in original meanings of texts)?

And what am I going to do with sentences such as her: “we have made ourselves the Problem of Islam today.” . Irshad Manji calls for an understanding of the Muslim community in all its diversity. Is it not then counterproductive to turn this community into a single problem? Mehdi Hasan reacted dissatisfied: “You are empowering Islamophobes”. The debate itself made it clear that progressive Moslems within the room were annoyed of being turned into this religion’s remaining problem or at least into a part of this problem, and I felt sympathies.