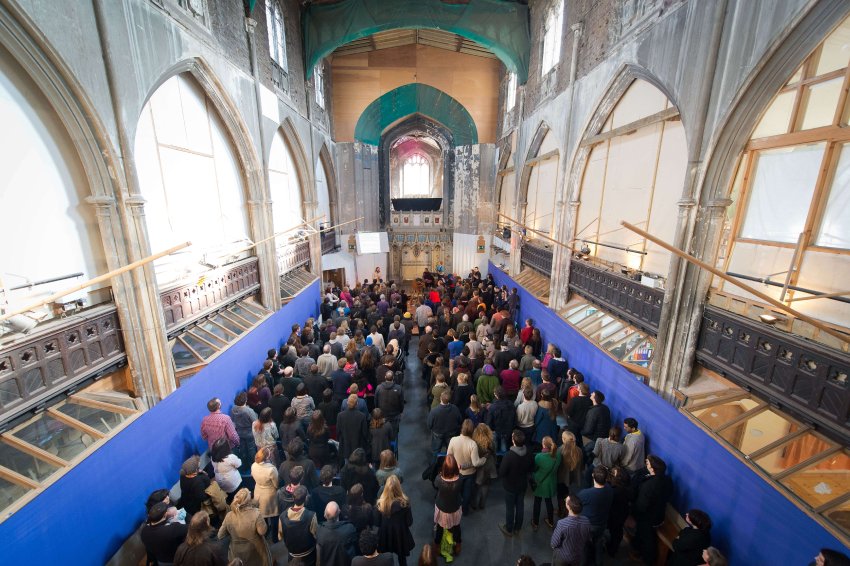 ‘Would you investigate the new Atheist Church in London for us?’

Sure, always up for discovering new things in London (an endless enterprise, so suggestions are always welcome), I was more than happy to attend a church service – or Sunday Assembly, as they call it themselves – in a church in my old neighbourhood. Would I be brainwashed by the gathering, at least I would be close my favourite bakery for coffee and pastries afterwards.

The Sunday Assembly is supposedly the first Atheist Church in London – worldwide there have been several attempts throughout history to try to set up an Atheist Church, most of them with little result. The initiative for this Sunday Assembly came from two comedians, Sanderson Jones and Pippa Evans, and their motto is ‘Live better. Help often. Wonder more’. It’s as simple as that. However, the huge media attention this new initiative has recieved so far, shows that there are as many eager curious as anxious skeptics (just Google if you like to read more comments). So who are these ‘atheists’? And what are they looking for in a church? 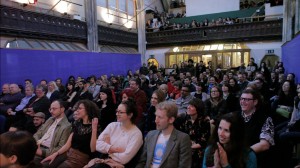 Well, Guardian-reading, middle class, trendy-looking Londoners, as it turns out. On the first sunny Sunday in ages (April 7th 2013), I made my way to the other end of town to attend ‘Easter for Atheist’ at the place of worship of the Sunday Assembly, the Nave in Islington. The first few Sunday Assemblies had been so popular, that this Sunday even had two meetings in a row, and still left people disappointed at the door steps. And indeed, when I arrived half an hour before the start of the event, there was already a queue of eager atheists up to the gate of the church which extended in high tempo around the corner of the street. Most of them arrived in groups of two to four people – there were couples, people who brought one of their parents along, etc. Most striking of all: everyone seemed very excited to be there, to spend their Sunday morning waiting in front of the church in anticipation of the assembly – how different from most Sunday morning services…

The entire meeting was strongly based upon a traditional church service, which made me wonder (it works!) about the role and function of church services in general, and what attracts people to attend them. Sanderson Jones tackled this problem in his introduction, after he had explained that this Sunday’s ‘Easter for Atheist’ was a week late, since the Easter weekend is always so busy for him due to look-alike work: 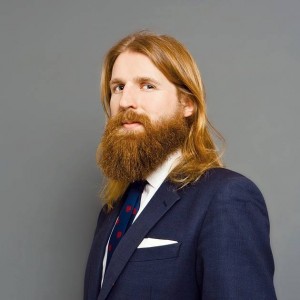 The tone was set, and Jones continued with ‘his first parable’, explaining that if you like a shoe but it has a pebble in it , you would not throw away the entire shoe, would you? Obviously, you would just take out the pebble. In other words, the Sunday Assembly just takes out the bad parts (God) and keeps the good bits (singing, a sense of community, a talk to think about, and tea at the end). And they definitely add a lot of humor.

Despite the exclusion of God to this Sunday morning in church, we were addressed as a congregation of believers-of-the-same. This made me feel slightly uncomfortable, partly because I grew up with the notion that I should never say ‘yes’ to anything before I have read the small prints, secondly because because I thought we were supposed to be a group of non-believers. Luckily, we were not asked to say ‘yes’ or ‘amen’ to anything, or lisp any Atheist Creed. Nevertheless, this was the point at which it began to dawn on me that about half of the ‘congregation’ was filled with visitors like me, people who came out of curiosity for this new phenomenon, and could not be pinned down as ‘believers of the same’, as there is not much to believe in when it comes to the Sunday Assembly.

I am not going to go into the meaning of ‘believing’ as such here, but I do think that it brings us to a core of the gathering. What makes people go to church (or not), and if it is not God, what is it that binds a ‘congregation’ together? Personally, it freaks me out if someone tells me what to believe, what makes my relationship to Christianity a complicated one. On the other hand, I do like the tradition and recognition of the same old patterns when going to a church service (strengthened by my usual active role as choir singer). These familiar structures make me somehow feel at home.

If you do not go to church, for whatever reason, this does not always mean that you do not like this sense of familiarity (whether this familiarity means a community, or singing familiar songs, or saying the same words together, obviously divers per person), and can be missed as a some kind of social structure. I think this is what the Sunday Assembly and its participants try to gain, to form a group of people gathering together, to build something that will become familiar, from which will spring a certain sense of community. And why not using an already existing form, so that the participants do not need to familiarize themselves with too many new concepts and structures? And spread the message over the world. And it clearly has an inclination to spread as we can see from the many initiatives worldwide to set up their own Sunday Assembly. Pippa Evans was not present at last Sunday’s Assembly since she was in Australia to prepare the first Australian Sunday Assembly (21 April in Melbourne), to name one example.

As long as it is not turning into a new church with its own dogma’s, rules and exclusions, it seems a great initiative. The fact that so many people came for the first time last Sunday, means on the one hand that there is interest and curiosity for it, but it also means that there is not a real community yet. The name ‘Atheist Church’ attracts a lot of spectators, who probably do not want to become a part of that community. Notwithstanding, it has to be said that the line-up of songs and the many jocular comments by Sanderson Jones throughout the morning show, brought a very jolly and positive atmosphere. And who would want not finish their Sunday morning by singing – together with a congregation, the band, following the great examples of British humor.

Not brainwashed, but nevertheless determined to get my coffee and pastry, I set off to the bakery, walking through the bright sun and with a jolly good mood.